We’ve all taken a peek at a mock draft or five already as we eagerly await the upcoming 2018 NFL Scouting Combine. Many of them focus on the same players going to the same spots, more or less, so we decided to take an outside-the-box approach to the NFL draft to stir things up.

This isn’t a mock. But it is a look at some really bold moves some of the teams atop the draft should consider making — unconventional moves that would alter the landscape of the league for years to come.

Browns take Lamar Jackson and Saquon Barkley at No. 1 and No. 4

This is probably nothing more than a pipe dream. Because John Dorsey almost certainly won’t be on board with rolling the dice like this, and we already know Scot McCloughan is high on Baker Mayfield.

But my goodness, imagine the havoc these two young playmakers would wreak together in the same backfield. Hue Jackson has had success helping young, mobile passers succeed in the past. And Lamar Jackson is blessed with more latent natural abilities (and no off-field red flags) than anyone we’ve seen enter the NFL in a long, long time. Plus, if the Browns really wanted to, they could easily lure AJ McCarron to Cleveland to serve as a bridge if they think Jackson isn’t ready to be thrown to the wolves right away.

The Browns already have a solid, veteran offensive line and can add to the receiving corps both through free agency and the draft. Pairing Jackson with Barkley would give the Browns one of the most exciting, big-play-capable offenses in the NFL right out of the gate.

Giants take Josh Allen at No. 2 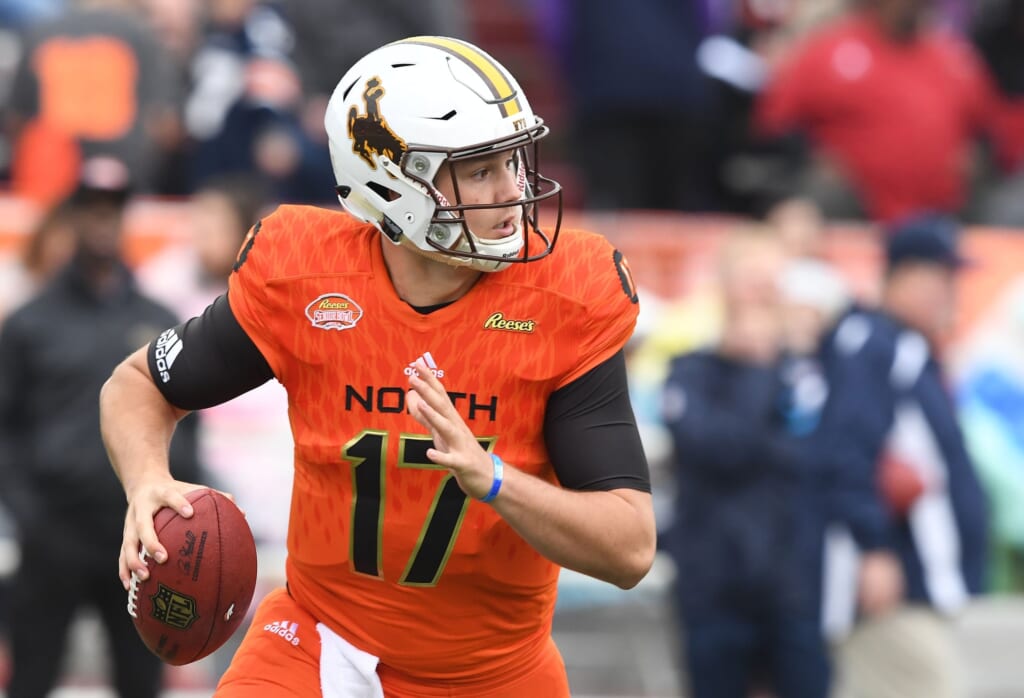 With both of those assumptions in mind, the Giants (who’ve already hinted they could take Manning’s eventual replacement) should absolutely take the quarterback at No. 2 with the most upside. That’s Josh Allen out of Wyoming. He’s still very raw and needs to sharpen up his mechanics, which routinely effect his accuracy. But when he’s in rhythm and has his feet pointing the right way, he’s absolutely deadly.

So, in this scenario, the Giants would have a variation of a Brett Favre-Aaron Rodgers situation on their hands. That’s how you prolong a franchise’s championship window. And make no mistake about it, if Manning has a resurgence this year, and provided his receivers can stay healthy, the Giants will be right back in the thick of things in 2018.

Colts take Quenton Nelson at No. 3

The most common thing you’ll notice about most mocks is that Bradley Chubb ends up being taken by the Indianapolis Colts at No. 3. That’s definitely a move that makes a ton of sense, and nobody should be surprised if that’s what happens in the end.

That said, perhaps the best way to really spark Indianapolis back to playoff contention is to provide Andrew Luck and Co. with a true blue-chip prospect on the offensive line. Nobody fits that description better than Quenton Nelson, the Notre Dame product who is the closest thing to a sure thing in this year’s draft. He’s a legitimate top-three player in this draft, having elite abilities both in the run and passing game.

Keeping Luck clean in the pocket will do wonders for Indy’s offense, as will having the ability to run the ball at will. By drafting Nelson, the Colts would be well on their way to accomplishing both of those goals.

Broncos take Bradley Chubb at No. 5

In this scenario, we’re assuming that John Elway has already made his bold move for a quarterback (cough! Kirk Cousins! cough!). With that already taken care of, and with Bradley Chubb still sitting there on the board in our scenario here, the Broncos must consider giving Von Miller a playmate capable of wrecking offensive lines like he does.

To envision the impact Chubb and Miller would have together, let’s just take a look at how much better the Los Angeles Chargers were this past year featuring both Joey Bosa and Melvin Ingram. Along with the top-end defensive secondary players Denver has on its roster, this move would likely give the Broncos the best passing defense in the league once again.

And with a quarterback in hand, that’s going to get Denver right back to the postseason after two years away from the festivities.

Bengals trade up to No. 6 to take Sam Darnold 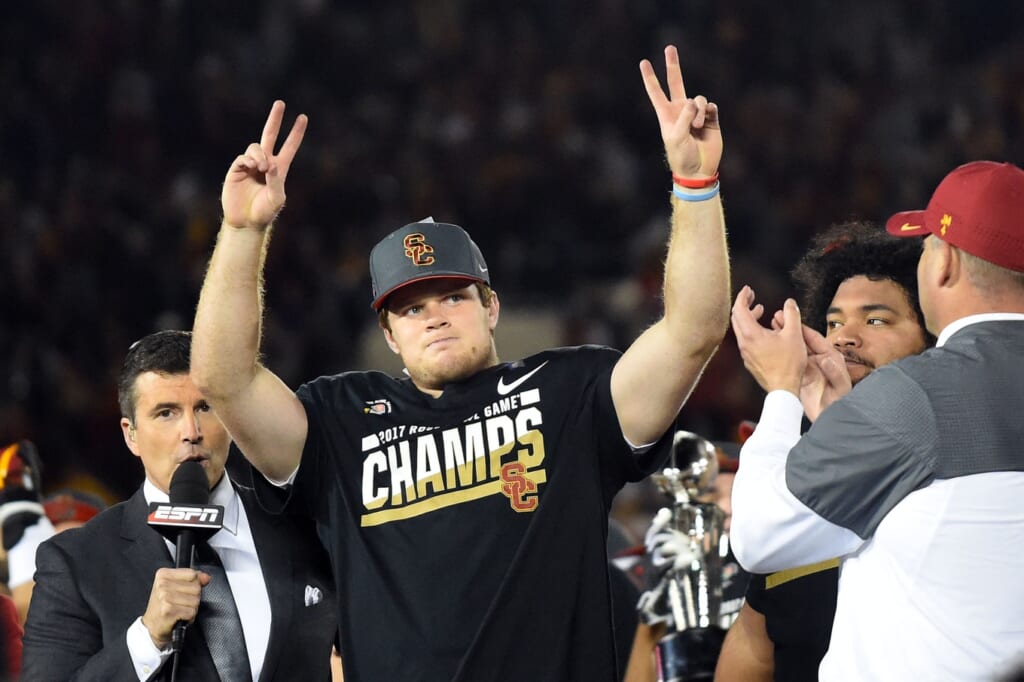 I really like Andy Dalton…as a person. He’s a great guy. But as an NFL quarterback? He’s average. There’s nothing special about what he can do on the gridiron. As long as he’s leading the offense in Cincinnati, the Bengals are going to be average, too.

If the Bengals wanted to, they could cut Darnold right now and save over $11 million. Even if they keep him on the roster this year, however, he’s essentially a lame duck heading into 2019, with no more guaranteed money left on his current deal.

This means Cincinnati has a very unique chance to bring in a guy like Sam Darnold, who has tons of talent but who likely needs another year of preparation before hitting the field on Sundays. He would benefit greatly from sitting a year behind Dalton, who is a pro’s pro. And if Dalton really stinks up the joint and Cincinnati falls into an early hole, then throw the rookie out there and let him learn on the fly.

Either way, it’s a win-win for the Bengals, who desperately need a spark.

Cardinals trade up to No. 7 for Josh Rosen

Assuming the five previous bold moves have played out the way we have laid out, Josh Rosen is still on the board at No. 7, when the Tampa Bay Buccaneers are slated to pick. That’s when Arizona Cardinals general manager Steve Keim needs to get on the horn immediately and work out a deal with the Bucs for this pick.

Of the top passers in this year’s draft class, Rosen and Baker Mayfield are best equipped to start right away. And assuming the Cardinals don’t clear up the cap space to pursue a top free agent, they’ll definitely be looking for a rookie who fits that bill, or who can at least compete for the starting job.

Rosen has the arm talent and demeanor to make an instant impact, especially if he’s put into a situation like this where he has talented playmakers already built in. With David Johnson, Larry Fitzgerald and Co. as his running mates, he’d be in a great spot to start his NFL career in style.