If you ever doubted for one second that college football is the craziest show in sports, well, consider Week 7 a firm rebuttal. There were two games on Friday night and a top-10 team went down in each of them. Things only got crazier from there. Five more teams in the top-25 — including two more in the top-10 — went down on Saturday.

Of the teams that managed to come out alive, Michigan, Wisconsin, Miami, Oklahoma, USC and Michigan State were all within one score of an upset. Yup, this sport is freaking crazy.

Here are 14 of college football’s unsung heroes from Week 7.

It takes a village to beat the No. 2 team in the country and Ishmael certainly did his part. The senior wideout went for 73 yards on six receptions and had a touchdown. That score came in the third quarter and put the Orange up 24-17. It was at that moment in the game — a 30-yard touchdown reception — that everyone realized Syracuse could actually pull this thing off. No doubt Ishmael will remember the moment for the rest of his life.

Kunaszyk, a junior from Sacramento, had the game of his life in the Golden Bears’ upset of Washington State on Friday. He went for 11 tackles, five of them solo, 2.5 tackles for loss, 2.5 sacks, and a quarterback hurry. Cal’s offense got a lot of credit — and the highlight of choice — in the wake of the 37-3 blowout win. But holding a Mike Leach-led team to just three points is an impressive achievement. Without Kunaszyk, they might not have been able to do it. 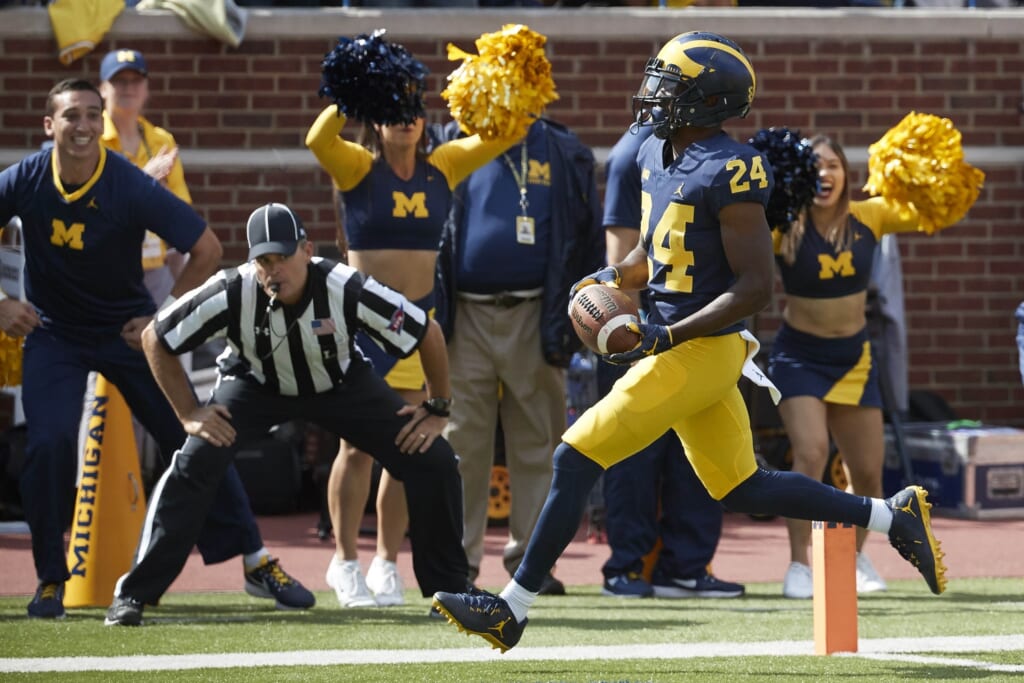 Hill is someone those who watch the Wolverines on a weekly basis may be familiar with. The sophomore has been a breakout player on this team as a shutdown corner. That didn’t change against the Hoosiers. Hill had a fourth-quarter interception and helped hold Indiana to just 4.6 yards per pass. Michigan may not have escaped Bloomington with a win if not for Hill.

Defense was the name of the game in the Sun Devils’ upset of Washington. Arizona State held last year’s Pac-12 champs to just seven points, and Sam was an absolute monster on the defensive end. The junior had 11 total tackles, eight of them solo. He also had 0.5 sacks and 0.5 tackles for loss. That is the type of defensive performance you need to pull off such a big upset.

The Badgers needed all they could get from their defense on Saturday and Jacobs gave them all he had. The senior linebacker led the team with nine tackles. He also had 0.5 tackles for loss, a quarterback hurry and an interception. Though he picked Purdue quarterback Elijah Sindelar with over 10 minutes left in the game, Wisconsin was able to run down the clock for the duration. Thanks to Jacobs, the Badgers avoided being yet another top-10 team to fall this weekend.

Gage had all of five touches for the Tigers on Saturday: three catches and two carries. Somehow, the senior wide receiver tied Derrius Guice for the team lead in rushing yards. That was thanks to a 70-yard scamper early in the game. It put LSU in position for their first touchdown. Gage got in the end zone himself as well with a 14-yard catch later on. Not bad for five touches.

Thanks to their one-point win over Georgia Tech, Miami won’t just jump into the top-10, but the Hurricanes are now setting the pace in the ACC as the lone undefeated team in the conference. Quarterman’s eight tackles on defense against the Yellow Jackets were tied for the team lead with Jaquan Johnson. He’s been a solid presence in the middle of the Hurricanes’ defense all year. If Miami continues its unbeaten run, Quarterman is a name worth familiarizing yourself with. 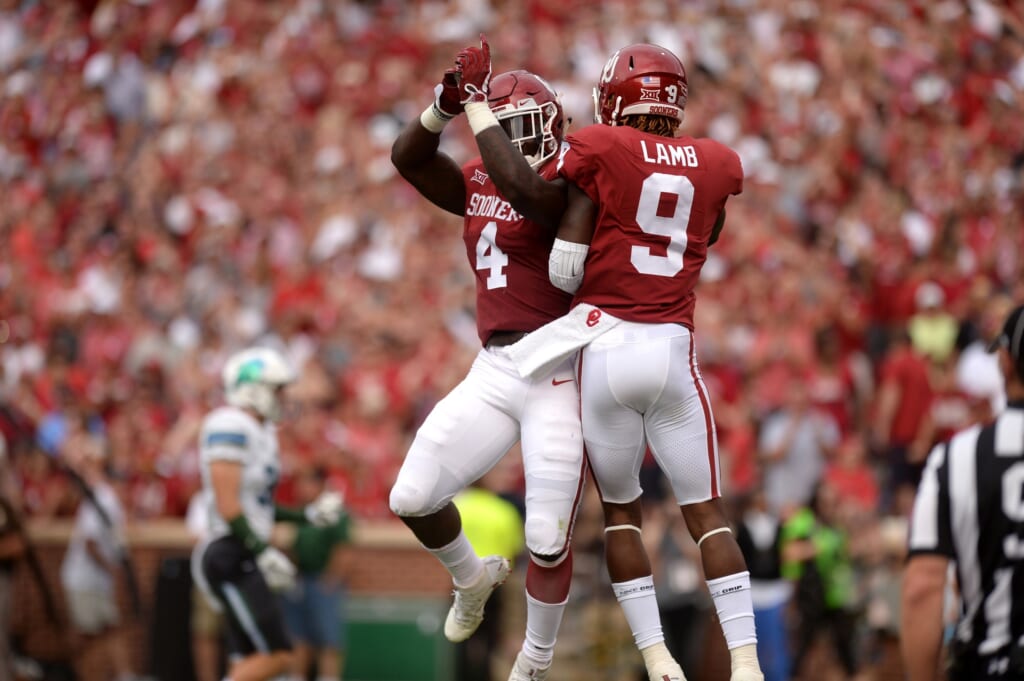 Lamb, a freshman, was playing in his first Red River Showdown. He still managed to make a pretty big impact. Despite just three receptions, Lamb went for 74 yards. That included a 44-yard catch early in the game to help set up a Sooner touchdown. Ultimately the early lead Lamb helped Oklahoma build was too much for Texas to overcome.

The focus will be on Trojans quarterback Sam Darnold, but Smith’s play was just as big a reason USC was able to eke out a win against Utah. The junior had an absurd 16 tackles against the Utes, including seven solo tackles and 0.5 tackles for a loss. Smith also had the only interception of the game for either team. Though early in the game, it came with Utah in the red zone, looking to score. It’s hard to believe the Trojans hold on without getting so much from Smith.

The Broncos scrambled the picture in the Group of Five Saturday night by handing San Diego State its first loss, to the tune of 31-14. If you didn’t stay up for the game, you missed a big performance from Vander Esch. The junior linebacker had 11 tackles — nearly double any of his teammates — including nine solo tackles. This is the fourth time in six games this year that Vander Esch has reached double-digit tackles. More than likely, it was also the sweetest.

Lost in all the chaos on Saturday night was Minnesota nearly pulling off a big fourth-quarter comeback to upset Michigan State. However, the Spartans’ run game was too much for the Golden Gophers to handle. Though much of that was LJ Scott, who went for an absurd 194 yards on 25 carries, London had a nice game as well. The junior went for 74 yards and a touchdown of his own. Not bad for a day’s work.

It’s a little odd to highlight defense in a game that ended 46-35, however, White was a pretty big reason the Mountaineers were able to prevent Texas Tech from scoring even more. The senior safety had nine tackles, tied for the team lead. He also had a late interception, sealing a comeback win for West Virginia. As far as the high-scoring Big 12 goes, that’s as good a defensive performance as you could ask for.

The Tigers knocked off a ranked opponent for the second time this season. If you’re looking for a reason why they beat Navy, look no further than Hall. The sophomore had 10 tackles and two interceptions against the Midshipmen. That included the game-winner with 1:51 left in the fourth quarter. As far as upsets go, this one went under the radar thanks to all the insanity that happened on Saturday. But Memphis certainly looks like a team that could get to a New Year’s Six bowl game right now.

The Gamecocks may well have put the nail in Tennessee head coach Butch Jones’ coffin on Saturday. They held the Vols to just nine points in a game that came down to the last play. Moore led South Carolina with nine tackles, including a sack and a tackle for loss. It’s never easy to win at Neyland Stadium, even when Tennessee is struggling. But Moore put in a huge day and the Gamecocks managed to pull it off.