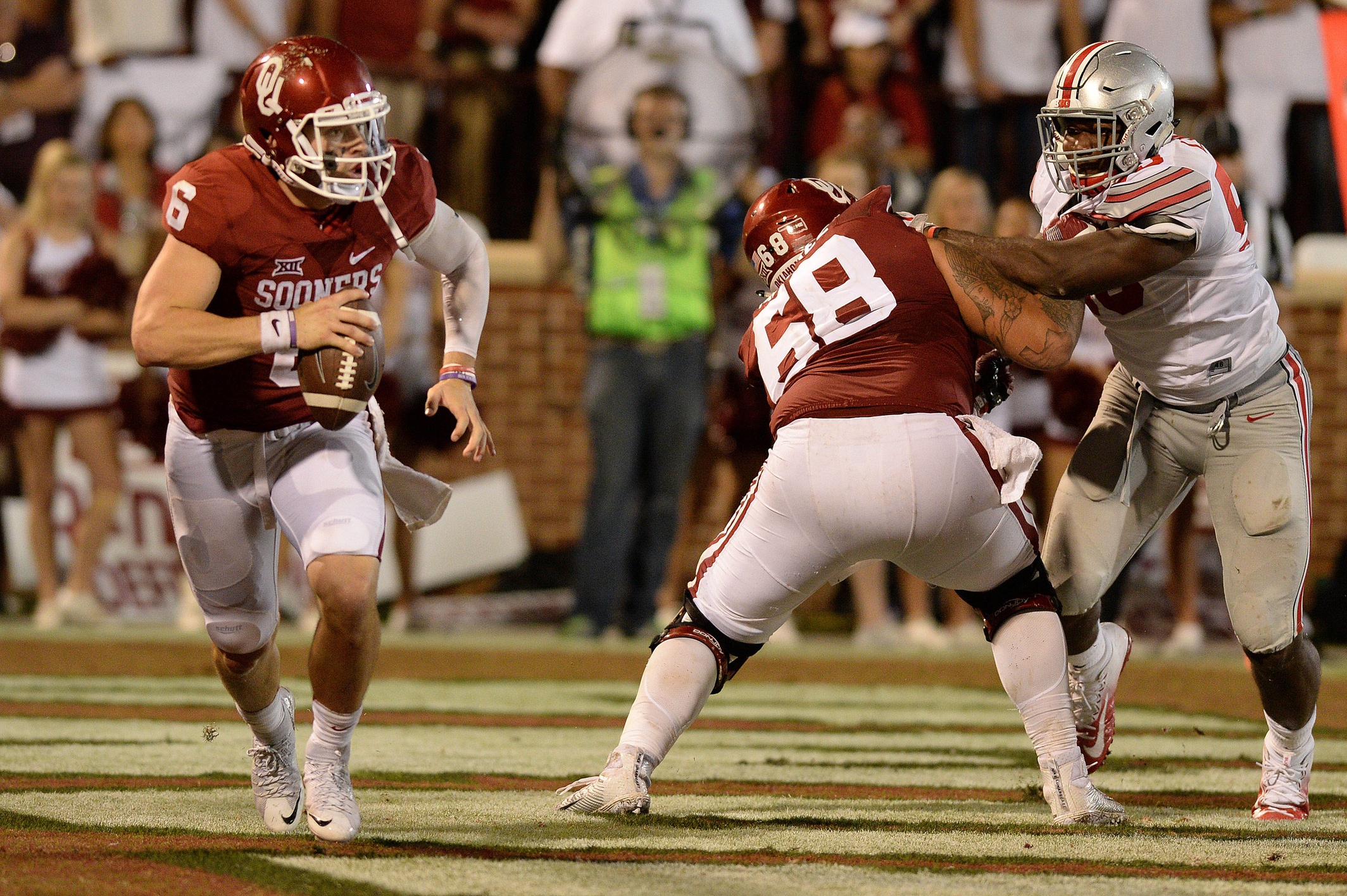 There’s no spectacle to compare to the weekly drama of collegiate sports, and we’ve got some tremendous games on the slate in college football Week 2.

The big-ticket attractions are the handful of games between top teams, such as Auburn going up against Clemson and Stanford heading into USC territory. Oh, and we can’t forget about Oklahoma and Ohio State.

Of course, this early in the season there are the predictable supposed gimmes lined up for some of the nation’s top teams as well. Though, if last weekend’s action was any indication that doesn’t mean a whole heck of a lot.

These are the things we’ll be looking forward to the most in college football Week 2.

If you didn’t get a chance to watch Oklahoma State put up 59 points last week, tune in Friday night. ESPN2 is featuring the Cowboys on the road against South Alabama, and we should see an offensive clinic. Mason Rudolph leads a passing attack that is among the most dynamic in the nation. Receiver James Washington (one of the best in college football) hauled in six passes for 145 yards and two touchdowns last week and should have another huge game. And the Cowboys are equally dangerous on the ground with Justice Hill as the featured back. The Jaguars should offer little resistance, so if you’re a fan of offensive fireworks this is right up your alley.

2. Can the Bearcats avoid a shutout against Michigan?

Jim McElwain’s Gators managed just three points of offense last week against the Wolverines, and they occurred on the game’s first drive. After that, Michigan’s defense clamped down with a ferocity worthy of its mascot. Now the Wolverines are back at home after playing in Texas, and Cincinnati might become the second course of that same meal. First-year head coach Luke Fickell won his debut at home, 26-14, but it was hardly an impressive victory against Austin Peay. He’ll do well if he can figure out a creative way to put any points on the board Saturday in Ann Arbor.

3. Lane Kiffin’s Owls get no reprieve in Week 2

One week after getting run over by Navy, Lane Kiffin’s Florida Atlantic squad heads to Madison for a date with the Wisconsin Badgers. At this point, an 0-2 start seems inevitable. What Kiffin must do is figure out a way to keep his team from getting eaten alive on the road. The Owls allowed 42 points to the Midshipmen in Week 1. They’ll do well to keep Wisconsin from scoring at least that many points Saturday. Based on the way the Owls defense fell apart faced with Navy’s rushing attack, however, we’re not holding our breath.

4. Lamar Jackson should eat, but can Louisville stop the Tar Heels? When Louisville hits the road for a date with North Carolina, it will be a battle between two teams that featured porous defenses in their season openers. Despite Lamar Jackson putting up 485 yards and throwing two touchdowns, Louisville struggled to defeat a Purdue squad that won three times last season. The Tar Heels lost their opener against Cal, giving up 469 yards and 35 points. Needless to say, this game will likely be won by the team that can make some defensive stands, even if Jackson has another huge game.

5. Time for Quintin Flowers to step up

Dark horse Heisman candidate Quintin Flowers has done little to impress in his first two games of the season. Though South Florida has been able to get off to a 2-0 start, Flowers has struggled to complete 50 percent of his passes against the likes of San Jose State and Stony Brook. Worse still, he’s averaging just 3.8 yards per carry and has scored just once on the ground and five times total. If the Bulls are going to remain one of the top-25 teams this season, and if Flowers is going to have a chance of staying in the Heisman race, he’ll need to make big improvements all around.

6. Can Pitt slow down Saquon Barkley?

The nation’s top running back was a runaway freight train last weekend as Penn State opened the season with a shutout win at home against Akron. The Nittany Lions face a slightly sterner test this Saturday when they host the Pitt Panthers, though we’re still betting on Barkley to run wild. In its first game against Youngstown State, Pitt allowed 208 yards rushing and nearly blew a lead, winning in overtime. Needless to say, Penn State’s offensive line will pose significantly more of a threat, and Barkley could easily go for 200-plus yards all by himself.

The Longhorns were shocked in Week 1 by a Maryland team that played the final quarter without its starting quarterback. They are heavily favored to win at home in Week 2 against San Jose State, but at this point nobody’s taking it for granted. Not after the past few seasons with Charlie Strong somehow bled into the first game of the Tom Herman era. There is no way the Longhorns should lose Saturday at home against the Spartans. In fact, they should win in blowout fashion. The big issue here for Texas is that the defense is still a train wreck. Herman is an offensive-minded head coach, so it’s going to be interesting to see how things shape up on the other side of the all in 2017. One thing nobody can argue is that Herman is already in must-win territory.

Indiana, fresh off a draining loss to Ohio State, hits the road to take on the Virginia Cavaliers in what could be a very entertaining game. Hoosiers quarterback Richard Lagow and his tremendous group of receivers took it to the Buckeyes for much of the first quarter before Greg Schiano’s unit put the clamps down and started forcing turnovers. Virginia’s defense, led by redshirt senior Micah Kizer (ranked No. 19 in our top-40 list entering the season), will have its hands full. Getting pressure on Lagow will be key if the Cavaliers are to hold serve at home.

9. What can Josh Rosen do for an encore? If you were lucky enough to have watched UCLA come back from a 34-point deficit on Sunday night against Texas A&M, then you saw Josh Rosen complete one of the most epic comebacks in recent memory. He threw for nearly 300 yards and four touchdown passes in the fourth quarter, capping off the comeback win with a Dan Marino-esque fake-spike touchdown to seal the win with less than a minute left on the clock (watch here). The Bruins are hosting Hawaii on Saturday in Pasedena. It sets up to be an offensive showdown in which Rosen could go for 500-plus yards. If you love offense and hate defense, this is the game for you.

Florida State got hit with a double-whammy of epic proportions in Week 1. In addition to the fact they were blown out by Alabama, the Seminoles lost quarterback Deondre Francois for the season (knee injury). Thankfully freshman quarterback James Blackman gets to ease into his new job against Louisiana Monroe, which Florida State is hosting in Week 2. Still, a team many thought could challenge for a national title is now going to have a truly vertical cliff to scale if those aspirations are to be attained.

11. Will Washington shrug off tepid opener?

The Huskies did not look like title contenders in Week 1. In particular, quarterback Jake Browning was not sharp at all against a Rutgers team that had no business hanging around with Washington. His top wide receiver caught just three passes, and his go-to pass catcher was running back Myles Gaskin. Washington is coming home for a Week 2 tilt against Montana, which should be nothing more than a light snack for last year’s Pac-12 champion. If the Grizzlies give the Huskies much trouble at all, it’s time to precipitouslydowngrade your expectations for their 2017 season.

12. Can Boise State upset Luke Falk and the Cougars?

There aren’t many offenses in the nation that consistently put up as much yardage through the air as Washington State. Luke Falk runs Mike Leach’s offense like a surgeon, which we saw last weekend when he completed 33-of-39 passes for 331 yards and three touchdowns. However, one team that has been able to get under Falk’s skin is Boise State. The Broncos beat the Cougars in Week 2 last season by three points, thanks in part to an 85-yard pick-six by cornerback Tyler Horton. The Cougars come into this contest ranked No. 20 in the nation. That ranking will plummet if they get knocked off for the second year in a row by Boise State. Stanford will be on the road taking on USC in what could be a season-defining game for both programs. The Cardinal blew through their season opener in Australia against Rice and are favored to win on the road against a Trojans squad that struggled to beat Western Michigan this past Saturday. Stanford’s defense will have its hands full shutting down Ronald Jones II and freshman Stephen Carr, but the same can be said for USC’s defense against Bryce Love. Of the two defenses, USC’s is the suspect unit, which is the biggest reason the Cardinal are favored to win. The second-biggest reason is that Sam Darnold was very shaky in his first 2017 start, throwing two interceptions. We are very much looking forward to this titanic battle, which will significantly shape the Pac-12 landscape.

One of the biggest games of the week is going down in South Bend. Georgia will be taking on Notre Dame, which jumped into the top 25 this week after an impressive opener against Temple. The Bulldogs are going to be without starting quarterback Jacob Eason, however, after the sophomore suffered a knee injury on a late hit out of bounds early in last weekend’s contest (watch here). Freshman Jake Fromm did an outstanding job in reserve and will get the start this weekend. But playing well against Appalachian State is one thing. Heading into Notre Dame Stadium and doing the same is quite another. The Bulldogs will likely lean heavily on running backs Sony Michel and Nick Chubb, who will be the difference in the game one way or another.

15. Can Auburn knock off Clemson in Death Valley?

Depending on where you are in the country and which teams you root for, this is either the biggest or second-biggest game of college football Week 2. Auburn has been talking about competing for a national title since the offseason. Now it’s time to put up or shut up. Former Baylor quarterback Jarrett Stidham wasn’t particularly sharp in his first game as Auburn’s starting quarterback. Meanwhile new Clemson starter Kelly Bryant had a very nice first game for Dabo Swinney’s crew. Not surprisingly, Clemson is favored to win at home. If Auburn has any hope of flipping that script, then Stidham needs to have a phenomenal game, while his defense needs to create some turnovers.

16. Which high-powered offense will triumph in Columbus? In terms of ranked teams and star power, this is the best game of Week 2. Oklahoma comes into the contest ranked No. 5 in the nation, while Ohio State is No. 2. Last year the Buckeyes humbled Baker Mayfield, who barely completed half his passes and threw two interceptions in a blowout loss at home. Mayfield comes into this game red hot. He was one incompletion away from being perfect last week as Oklahoma beat the pants off UTEP. But he faces a much more capable defense this weekend, on the road in Columbus, no less. On the other side, freshman running back J.K. Dobbins is the linchpin for Ohio State’s offense. He broke a school record for freshmen in a first game, rushing for 181 yards, sparking a second-half offensive awakening Ohio State, which ended up with 596 total yards. Both defenses will have their hands full. It should be an incredibly fun game to watch.