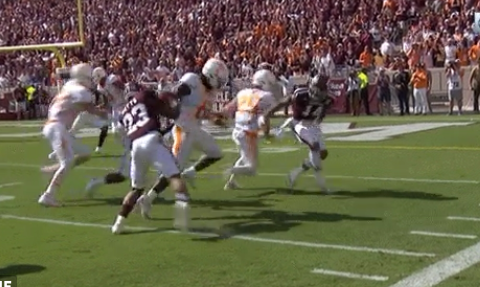 Tennessee running back Alvin Kamara put on some outrageous moves to turn a screen pass into a brilliant play, but ultimately he failed to finish.

Having advanced the ball into the red zone, Kamara had the ball ripped right out of his hands by Texas A&M defensive back Armani Watts.

The fine play of Watts negated what was a fabulous run after the catch by Kamara.

Unfortunately for Kamara, this wasn’t a one-time issue. It was the second game in a row in which he coughed up a football. As dynamic as he is with the ball in his hands, that kind of ball security will get him benched eventually unless he fixes the problem quickly.

Instead of having a chance to potentially tie the game up at seven points apiece, or at least pull to within four points with a field goal, the fumble represented a wasted opportunity for the Vols in a critical SEC matchup.

But not long afterwards Joshua Dobbs led a six-play drive to tie the game up at 7-7 with more than three minutes left in the first quarter.