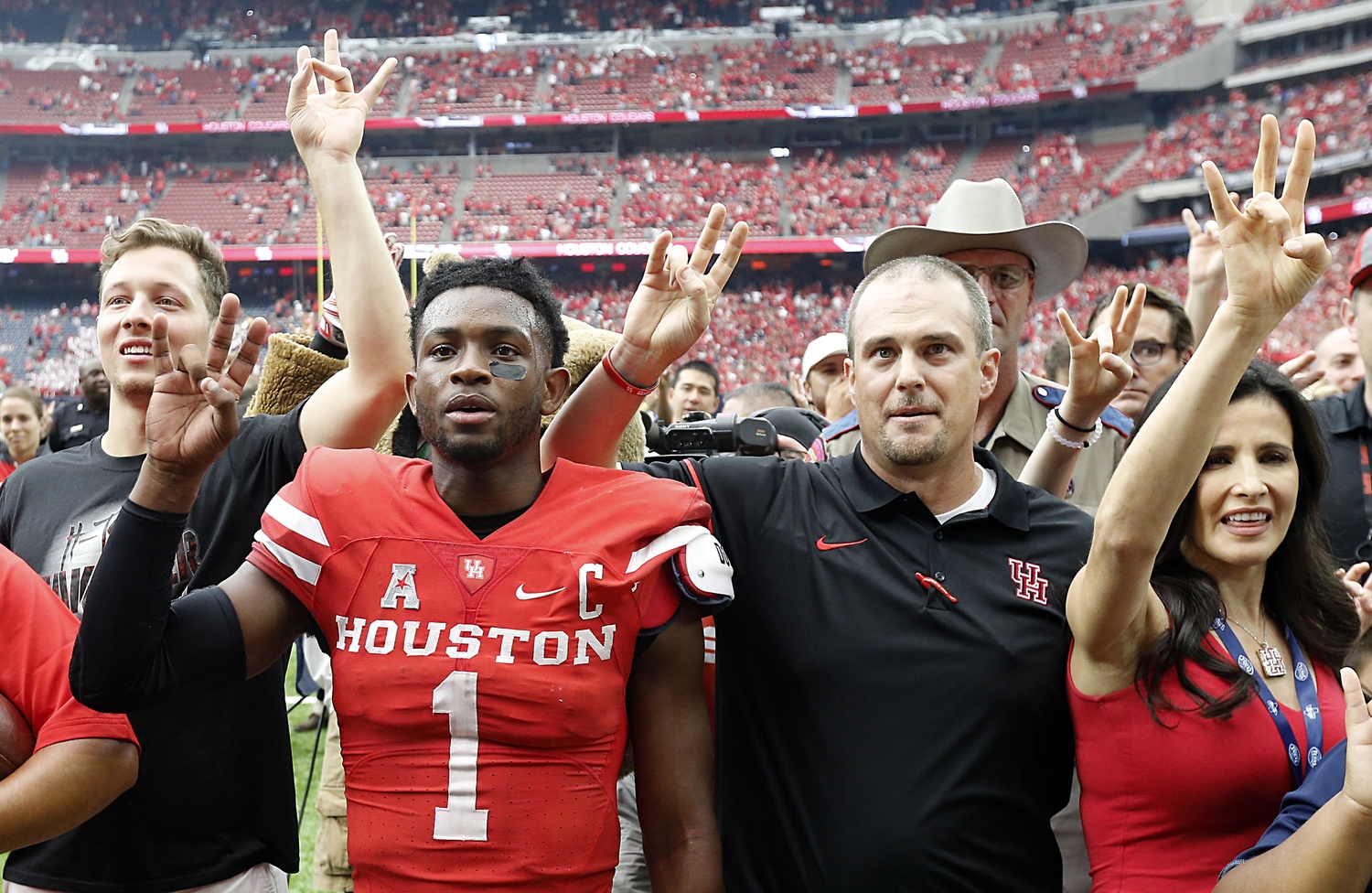 Three days into the 2016 season and it’s still sinking in how glorious the pageantry and drama of college football truly is. The action in Week 1 isn’t quite finished, with one game on Sunday and another Monday night. But we’ll consider those the afterparty after an eventful weekend of action.

Highlighting the first slate of games are a couple of upsets, some breakout performances by new stars, the return of a prolific rusher and some shaky showings by players living with big expectations.

These are the top takeaways from Week 1 of the college football season.

1. Lamar Jackson has piqued our interest

Louisville (No. 19) had no trouble taking care of business against Charlotte Thursday night, winning 70-14.

This was mostly due to the offensive explosion produced by true sophomore quarterback Lamar Jackson, who opened up eyes around the nation.

Lamar Jackson only played half the game but his stat line was ?. pic.twitter.com/ZugwG3VVba

Now, you might brush off his performance, given the fact that Charlotte is hardly a national powerhouse. But check out this ridiculous set of stats.

The two games from last year Bruce Feldman references here were against Kentucky and Texas A&M, programs with a bit more clout.

Clearly, this kid has something special going on. We’re going to be watching him closely next week when the Cardinals visit the Syracuse Orange.

The Volunteers needed overtime to win the game after falling into an early 13-3 hole at halftime. In fact, Appalachian State led for most of the game until Joshua Dobbs finally connected with receiver Josh Malone on a 67-yard touchdown in the fourth quarter.

Tennessee’s vaunted defense found itself getting pushed around up front by the Mountaineers, who finished with 184 rushing yards. Controlling the clock with that rushing attack, Appalachian State nearly executed the perfect game plan to engineer the upset.

The Mountaineers weren’t a cupcake opponent, but this was far from the statement Tennessee needed to make. And it hardly looked like the same team that rattled off six wins in a row to close out 2015.

The Vols need to fix what’s broken quickly. Dobbs needs to be sharper, the offensive line needs to be more cohesive and the defense must tighten up. Coming up next is Virginia Tech at the Bristol Motor Speedway, where they’re expecting to smash capacity records.

3. Christian McCaffrey is still a stud

Despite the best efforts of Kansas State, Heisman hopeful McCaffrey was magnificent on Friday night for No. 8-ranked Stanford.

You could say Christian McCaffrey's season opener was a success. ✅ pic.twitter.com/GD8C1NQE7J

Playing behind an offensive line that was dominated by the Wildcats most of the night, McCaffrey was as patient as a jungle cat waiting for its moment to pounce. When holes finally developed, he took advantage.

The first of his two rushing scores occurred in the second quarter. On a designed run to the left, he saw a cutback lane, juked a defender right out of his shoes and reversed field for an easy 35-yard score (watch here).

McCaffrey’s second score of the game sealed the win for Stanford. He had been frustrated most of the night as defenders were meeting him in the backfield. Finally the Cardinal offensive line provided a legitimate running lane late in the fourth quarter, and he bolted through it for a 41-yard touchdown.

Taking away the two long touchdown runs, McCaffrey averaged 2.5 yards per carry. That’s how rough it was most of the night. It’s a testament to his attitude, vision and jaw-dropping athleticism that he was able to wait out the tough stretches and shine when it mattered most.

Nobody knows for sure if the Big 12 will expand, but if it does, Houston (No. 15) needs to be at the top of the list as an expansion team.

The Cougars shocked the No. 3-ranked Sooners on Saturday, winning 33-23 while showing up big in all three phases of the game. It was the second straight win over a top-10 team, dating back to last year’s Peach Bowl win over Florida State.

Greg Ward Jr. looks like a legitimate Heisman candidate. He passed for 321 yards with two touchdowns and no interceptions while distributing the ball to seven different receivers. He also kept Baker Mayfield and Oklahoma’s offense off the field for long stretches of time, dominating the time of possession battle.

And then there was this catch by Linell Bonner III.

Houston’s defense was also impressive. After allowing 17 first-half points, the Cougars made excellent halftime adjustments and did an outstanding job shutting down the Sooners to the tune of just six points allowed in the second half.

Then on special teams, Brandon Williams took a missed field goal back 100 yards for a huge score that was the difference in the game.

Oklahoma’s playoff hopes aren’t completely dashed at this point, but the Sooners are now playing with their backs against the wall the rest of the way.

On the other side, we’re sure to see Houston bumped up into the top 10 next week when the updated polls come out. It was a magnificent effort that puts the national spotlight on Tom Herman’s program, which deserves the attention.

It’s safe to say Barrett’s first year as the undisputed starter for Ohio State (No. 6) has him in a comfort zone.

The junior quarterback set a Buckeyes record by accounting for seven touchdowns — six passing and one running — while totaling 379 yards before giving way to Joe Burrow midway through the third quarter.

Have a day, @JT_theQB4th. J.T. finished the day responsible for an @OhioStateFB record 7 TDs. Here's all of them. https://t.co/vxtgWip2XB

Interestingly, the game got off to a horrible start for Barrett. He threw a pick-six on the game-opening drive to Bowling Green’s Brandon Harris, who took it back 63 yards for the score.

That Ohio State romped over Bowling Green was about as surprising as the socks your uncle gives you every year for Christmas.

Still, Buckeyes fans should be excited about the passing attack this year. Five different receivers caught one touchdown, and two of them caught two. With Barnett’s ability to distribute, the team’s ability to run the ball and this talented receiving corps, the Buckeyes are dangerous. Leonard Fournette is ridiculous, but he cannot be the only reliable offensive weapon in LSU’s arsenal if the Tigers (No. 5) have any chance of making the playoffs after losing to Wisconsin Saturday.

The Badgers, riding the momentum of the swollen crowd at famed Lambeau Field, dominated the trenches in their 16-14 victory.

Fournette scored at least one touchdown in every game last year minus the Ole Miss game, but he couldn’t find the end zone in this one. Wisconsin’s defense swarmed the hobbled Heisman hopeful, who still managed to total 176 yards.

The big concern, besides the loss, is that Harris was so ineffective in the passing game.

The junior quarterback struggled last year in his first campaign as a starter. And despite head coach Les Miles’ assertion that he’s a “totally different quarterback” this season, it appears he hasn’t gotten any better with a year of seasoning.

Harris completed just 12-of-21 passes for 21 yards with one touchdown and two atrocious interceptions.

If the Tigers have any hope of recovering from this early loss, either Harris needs to improve or be replaced.

Oh, and please, for the love of God, no more cheap shots like the one Josh Boutte delivered after the game was decided (watch here). Before we launch into anything critical here, it’s worth pointing out how resilient Rosen was on Saturday afternoon at Kyle Field against Texas A&M.

The true sophomore was under constant pressure throughout the game. As pointed out late in the game by the CBS stats crew during the live broadcast, the No. 16-ranked Aggies had sacked Rosen five times, knocked him down 10 times and hurried him 21 times at that point in the game.

Myles Garrett was unblockable at times. The Bruins ended up using three men to keep him contained on a regular basis during the second half. Still, he managed to get his piece of the Rosen pie with a brutish sack in the second half.

UCLA’s offensive line was overwhelmed, and Rosen was rattled almost from the beginning of the game. He finished with 343 yards on 26-of-46 passing with one touchdown and three interceptions.

Still, despite all their struggles, the Bruins had a shot to win the game after a brilliant fourth-quarter comeback.

But when they needed it the most, they failed to execute.

Head coach Jim Mora has compared Rosen’s preparation and intellect to that of Peyton Manning’s in the past (read more on that here).

At this point, it seems a bit early for all that. The only way to describe the young quarterback’s performance against the Aggies is that it was ugly.

Rosen and the Bruins host UNLV next weekend. Hopefully the comforts of home will serve as a healing balm.

Any concerns about the health of Georgia running back Nick Chubb were quickly erased when he romped for 59 yards and a touchdown in the first quarter. By halftime, he’d doubled that total with 118 rushing yards.

Incredibly, he nearly doubled that total by game’s end.

Coming through in the clutch for the No. 18-ranked Bulldogs, he finished with with a 55-yard bullet train run at around the 3:30 mark in the fourth quarter to put Georgia up for good over the No. 22-ranked North Carolina Tar Heels.

In the end, Chubb had tallied 222 rushing yards and two touchdowns on 32 carries. Not only did he make a statement about his health, but he also made a statement to the rest of the Heisman contenders that he’s a legitimate threat this year.

Georgia gets a downgrade in competition next week when they host FCS school Nicholls State. Depending on how much Kirby Smart leans on Chubb in that one, he could easily double his numbers from Saturday.

9. USC never had a chance against Alabama

Poor, poor Max Browne. After waiting a few years to finally get his chance to lead USC’s offense, the redshirt junior was stomped down by the NFL-caliber Alabama defense Saturday night.

Things actually looked up during the first quarter. Browne went eight-of-11 for 68 yards and the Trojans took an early 3-0 lead, much to the shock of the pro-‘Bama crowd at AT&T Stadium.

But the sunshine and roses quickly turned to storm clouds and ashes.

Alabama’s offense finally woke up in the second quarter, and the defense turned up the heat in a major way.

The score was 10-3 when Jabari Ruffin stomped the groin of Anthony Averett after a kickoff return (watch here).

That’s pretty much when the game got out of hand for the Trojans. Ruffin was ejected, and two plays later the Crimson Tide went up 17-3 after a pick-six by Marlon Humphrey.

Business as usual for Alabama. pic.twitter.com/zyCa7sArnK

10. Deshaun Watson gets away with sloppy outing against Auburn

The Clemson Tigers (No. 2) were barely good enough Saturday night against the Auburn Tigers to walk out of Jordan-Hare Stadium with a win.

And we mean barely.

Watson’s 2016 Heisman campaign got started with a whimper. He was sloppy all night long, completing 19-of-34 passes for 248 yards with a touchdown and one interception. His lone touchdown came on a gorgeous pass to receiver Hunter Renfro, who sold out to make the grab falling down in the end zone.

The only real positives to take away from the evening is that Clemson’s defense owned the line of scrimmage, Wayne Gallman put in a hard night of work running the ball and Watson showed excellent chemistry with all-world receiver Mike Williams.

If not for even worse quarterback play by his Auburn counterparts, Sean White and Jeremy Johnson, Watson and the Tigers would have been beaten on the road.

We’ll be watching Clemson carefully to see how they respond in the coming weeks after a dismal effort.