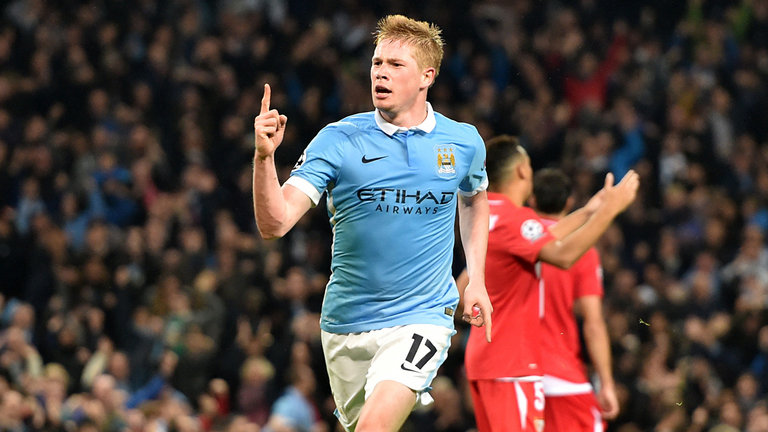 For the first 36 minutes of the Manchester Derby, Manchester City produced a performance that seemed like a flood on United’s defense.

Under wave after wave of City possession and movement, it was their own inability to press as a team that caused United to look like an incoherent shambles — Henrikh Mkhitaryan and Jesse Lingard being the weakest first half performers overall.

Where United looked a shambles, Manchester City’s Kevin De Bruyne looked priceless, considering today’s transfer market values. His performance was highlighted by the coolest of finishes, sending the world best goalkeeper David De Dea in the wrong direction when through on goal.

It took a Claudio Bravo mistake for the red of Manchester to wake up. A fumbled cross left the ball at an awkward height for most players. Fortunately for United fans, it fell to Zlatan Ibrahimovic, who scored on a perfectly hit volley.

A few minutes later, Bravo was struggling again as he caused confusion in his own defense leaving Zlatan with only John Stones to beat in an open goal. This time, the shot was rushed and weak.

The first half ended with Manchester City 2-1 up in the derby. They should have been further in the lead but looked deflated as United didn’t deserve their goal. United replaced Mkhitaryan and Lingard with Ander Herrera and under-21 starlet Marcus Rashford during the interval.

In the first few minutes of the second half, United pressed, initially stopping City’s build-up play. Rashford had a few early runs in which he showed strength, pace and self-confidence.

With such passion it was inevitable United would become more physical. Zlatan and Marouane Fellaini picked up yellow cards and the needless fouls broke any early momentum. City again took control within ten minutes.

The only way United looked to score was through more City goalkeeping mistakes from Bravo.

In the 56th minute, Bravo got away with a crunching tackle on Wayne Rooney after another moment of carelessness. This would end up a long-running battle with Rooney eventually getting yellow carded for a tackle on the goalkeeper.

The second half became a demonstration of managerial chess. United played to get the ball forward with haste, looking for direct passes. Man City became more resolute, keeping possession, and was able to counter-attack United who tried to overload the City defense.

In the 70th minute, it was United’s turn to break, with Rashford shot deliberately redirected by Zlatan into the City net. Yet it was from an obviously offside position.

The game became stretched, but City kept breaking with exceptional pace. It was De Bruyne who once again found himself in an attacking position shooting low to beat De Gea, this time hitting the foot of the upright before rolling across the goal line.

In the final ten minutes, Jose Mourinho seemed to change tactics once again. Every United player except Eric Bailly was playing high up towards the City box.

Referee Mark Clattenburg made two obvious poor decisions. The first was in not sending off Claudio Bravo for his reckless tackle on Wayne Rooney. This should have been a penalty for Manchester United. Secondly, Nicolás Otamendi closed down an Antonio Valencia cross with an outstretched arm, which too should have resulted in a penalty.

United needed at least one of those penalty decisions, as they were unable to create any more chances until the final minutes. With Zlatan taking a few snapshots and Rooney being beaten only by Fernandinho’s last ditch bravery. Bravo made one last mistake but City was able to clear before the full-time whistle.

In the end, Manchester City deservedly won the derby 2-1. Their undefeated Premier League record remains this season. One thing is certain: If the second half of this game is an indication of where this season is heading, football fans are in for a treat.