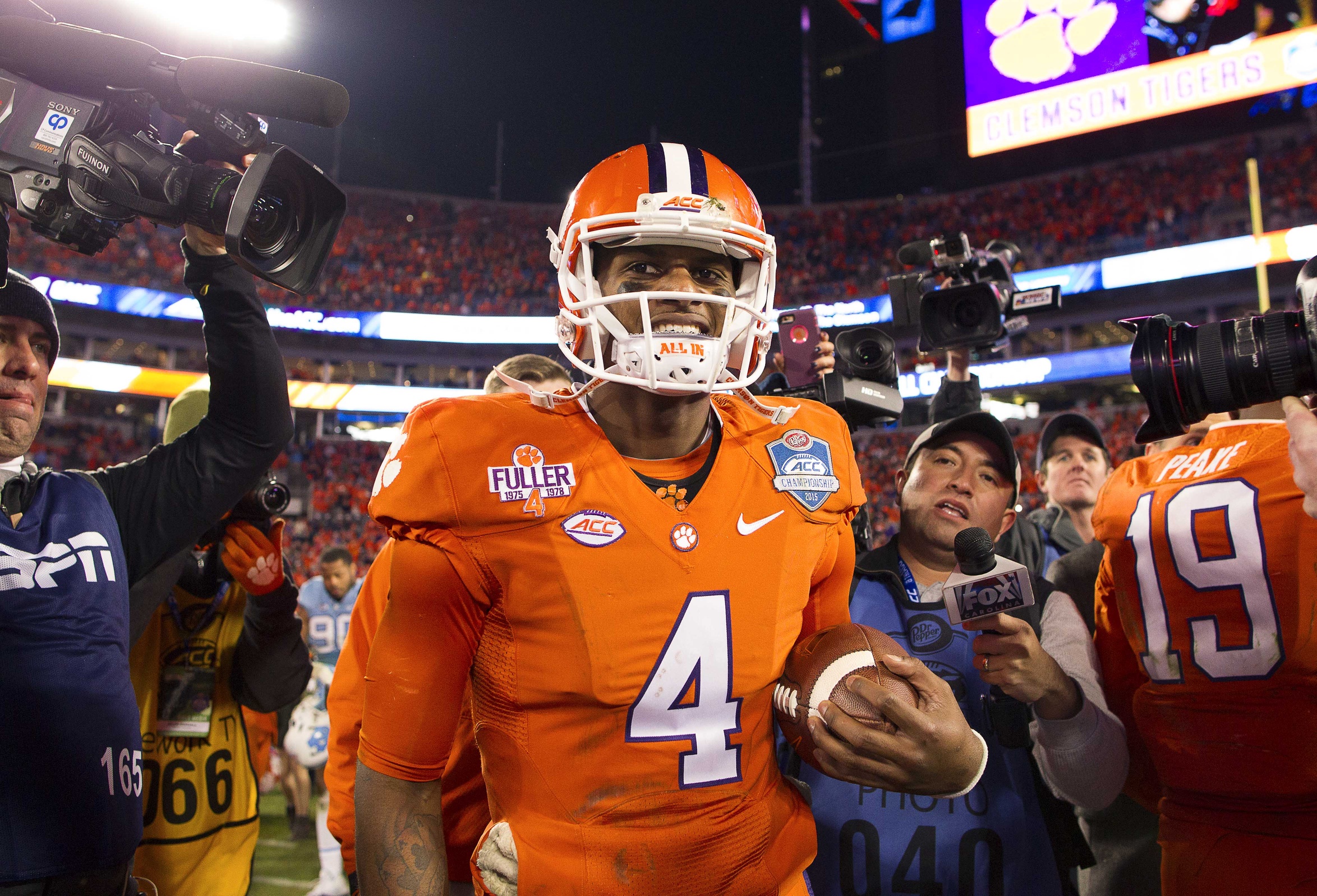 There are no more questions to be answered after college football’s conference championship weekend.

While the Selection Committee won’t reveal its final rankings until early next week, we can safely project the top four teams, based on the outcomes of the games this weekend and the previous rankings.

There weren’t any big upsets this weekend, so the potential chaos many wondered about never came into fruition. There were, however, some big statements made. Thanks to the efforts of quarterback Deshaun Watson, who can do it all on the field and who always comes through in the clutch, Clemson is the only remaining undefeated team in the nation. There is no more arguing which team deserves the No. 1 spot after the Tigers took care of business against the Tar Heels, winning 45-37, and it’s going to take quite a defensive effort to stymie Watson’s potent offense.

Clemson’s defense has been exposed the past month-and-a-half, allowing 33-plus points in five of its last six games. With that in mind, a particularly explosive offensive performance could propel another team to the national championship.

That said, it’s going to be hard to keep the Tigers away from the trophy at the end of the day.

Watson had another monster game in the ACC Championship Game against North Carolina, racking up 420 total yards and five touchdowns. This impressive performance boosted his seasonal totals up to 4,399 yards and 41 touchdowns, putting him right there in the forefront as a Heisman Trophy contender.

He’s the reason the Tigers are No. 1. He’s the reason they will either win or lose in the playoff. And, based on what he’s been able to accomplish this season in his first year as a starter, Clemson will finish the season hoisting the championship trophy. Make no mistake about it, Alabama (No. 2) isn’t devoid of weakness. Quarterback Jake Coker’s final numbers in Saturday’s win over Florida (No. 18) were respectable, but he’s certainly the weak link of the chain for the Crimson Tide. Thankfully, ‘Bama might not need Coker to play hero at any point going forward because the defense is unbelievably good.

While nobody will mistake Florida’s Treon Harris for the likes of Clemson’s Watson, the Gators were held to just 180 total yards of offense on Saturday in the championship game. It wasn’t until late in the fourth quarter that the offense put any points on the board, and the only other score came on an outstanding punt return for touchdown by freshman Antonio Callaway (watch here).

Of course, the catalyst for this defensive success starts up front for Nick Saban’s defense, which held Florida to 15 total yards on the ground and 0.7 yards per carry.

Dating back to Alabama’s impressive, dominating win over then-undefeated LSU, this defense has allowed just 230 yards and 11.2 points per game. On the season, opposing runners achieved hardly any success at all, averaging 2.38 yards per carry and getting into the end zone just six times.

This is a veritable brick wall, the likes of which even Leonard Fournette couldn’t break through.

Because of Coker’s limitations as a passer, along with his accuracy and decision-making issues, the Crimson Tide desperately need continued excellence from their defense going forward to win the ultimate prize. That said, nobody should be overly surprised if this dominant unit does carry ‘Bama to another national title — the fourth in seven years.

3. Stanford is good enough to get into the College Football Playoff The answer to that question is an easy “no.”

The Cardinal were robbed of the opportunity to compete for the national championship for the simple reason that the Pac 12’s schedule is brutally difficult, whereas two of the teams that made it into the playoff — Clemson and Michigan State — didn’t have a ton of competition standing in their way.

Stanford was taken down by a very good Northwestern team in Week 1 and then experienced one more hiccup against Oregon. Otherwise, the Cardinal were just as impressive as any other top team in the nation, and the final statement against USC was really impressive.

As it stands, Stanford will be right on the outside looking in, probably right behind Ohio State in the rankings.

The Pac 12 really should think about changing things around schedule-wise, because this seems to happen every year to the top team in the conference. This conference hurts itself every year because there is literally no room to breathe. Every game is a big test, unlike what we see from the top teams playing in the SEC, ACC, Big Ten and Big 12.

Because of this, one of the four best teams in the nation will not have a shot in the four-team tournament.

4. Michigan State must improve dramatically for the playoff Forever more the 2015 Big Ten Championship Game between Michigan State and Iowa shall be dubbed the “Bludgeon Bowl.” The game was as ugly as it gets, and nobody can convince me Connor Cook’s shoulder is anywhere close to being healthy.

Given the fact Iowa managed just 51 yards rushing and 85 of C.J. Beathard’s 208 yards came on one play, it’s crazy that Michigan State won by just three points over the Hawkeyes, 16-13.

Thankfully, Michigan State now has time to get healthy for the playoff, where the going gets even tougher.

Assuming the Spartans end up as the No. 4 seed, which should be the case, they will be tasked with stopping Deshaun Watson and the Clemson Tigers, who haven’t lost all year. Watson’s dual-threat skills at quarterback are unrivaled in the nation, and Clemson’s defense is equally unrivaled in terms of pure speed.

The Tigers also shut down the run with regularity, which means Cook might need to be a difference-maker. It’s been rough sledding for the senior quarterback since the second week of November, when he hurt his shoulder. Hopefully the month off between games will give him enough time to get fully healthy.

Michigan State will likely enter the Orange Bowl as overwhelming underdogs, as it should. It’s going to take nothing less than the program’s best game of the season to come out of this one victorious, because Clemson looks unstoppable. It was a long, hard season for Texas football and all its fans. The Longhorns finished with a record of 5-7, missing out on a bowl bid for the first time in five seasons. Sounds bad, right? But things are actually looking up instead of down, and fans should be optimistic about the program’s direction going forward.

Just like they did against Oklahoma in Week 6, the Longhorns played their hearts out while ripping the heart out of their opponent, defeating Baylor (No. 12) by a score of 23-17. With the win, Texas defeated its second top-12 team this year, which is significant.

Texas has a lot of work to catch up to the top teams in the Big 12, but at this point it’s clear the program is in good hands with Strong. He’s gotten his players to play hard all year, despite being outgunned on many occasions.

Injuries and poor recruiting during predecessor Mack Brown’s final years set Texas back big time in 2015. But with a few changes — primarily on the offensive side, where a fresh approach and an infusion of talent is clearly needed — the Longhorns should become respectable once again the next couple of seasons.

After Henry’s performance against Florida Saturday, it seemed clear the 2015 Heisman Trophy belonged to him. Churning out 189 yards and one touchdown on 44 bruising carries, Henry heads into New York with the nation’s top totals in rushing yards (1,986) and touchdowns (23).

It was also his 18th game in a row in which he rushed for at least one touchdown. Furthermore, he passed legendary Georgia’s Herschel Walker for the most rushing yards in a single season in SEC history.

Further helping Henry’s cause, some of his biggest games this season have come against top defenses and have keyed big wins for the Tide, who now roll into the College Football Playoff looking awfully tough to beat.

But later in the evening, Christian McCaffrey pulled out ALL the stops to open up eyeballs around the nation, including the folks who vote for the Heisman. Needing 216 all-purpose yards to break Barry Sanders’ all-time record for a single season, McCaffrey took care of that before halftime on his way to a legendary regular-season finale.

Along the way, he added to his Heisman resume with a touchdown pass to quarterback Kevin Hogan, proving he really can do it all.

The Stanford star finished the game with 461 all-purpose yards, rushing for 207, catching four passes for 105 yards, adding 11 yards through the air and another 149 return yards.

It was a tremendous statement game for the most electric player in the nation, and the Heisman voters now have quite the tough decision in front of them.

It’s really quite a shame Ward hurt his ankle in the Memphis game.

The dual-threat quarterback finished off the season undefeated as a starter when he led Houston (No. 19) over Temple (No. 22) Saturday to win the AAC Championship Game, 24-13. With the win, the Cougars finished the season with a record of 12-1 that almost certainly would have been 13-0 if Ward had been able to start against Connecticut three weekends ago.

Imagine the headache that would have caused the Selection Committee…

Ward was brilliant on the ground against a Temple run defense that was ranked No. 13 in the nation against the run before this contest, allowing just 3.5 yards per game. He finished with 148 yards and two touchdowns rushing the ball, averaging 8.7 yards along the way, and added another 88 yards passing.

As a cherry on top to his season, Ward finished with 16 touchdowns passing and 19 rushing and was the only player in the FBS to have at least 15 of each.

Greg Ward Jr. is only player in FBS this season with at least 15 passing & 15 rushing TDs. pic.twitter.com/F7buJAIcJG