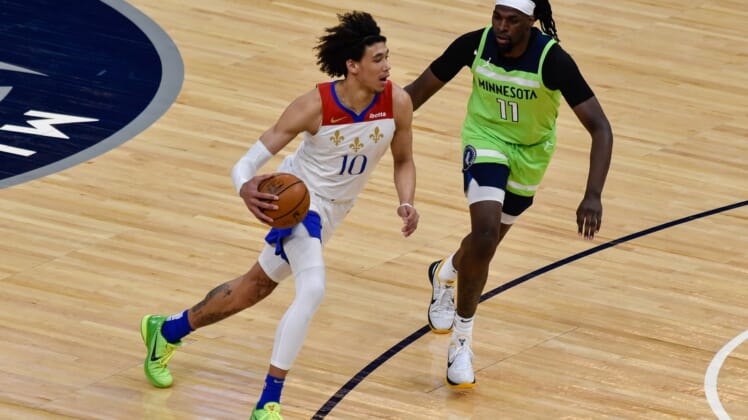 Zion Williamson scored 37 points and Lonzo Ball had a career-best game as the visiting New Orleans Pelicans rallied late to defeat the Minnesota Timberwolves 140-136 in overtime on Saturday night.

Williamson made 14-of-17 field goals and added nine rebounds and tied a career high with eight assists. Ball scored a career-high 33 points while tying a career best with eight 3-pointers, and added 11 rebounds.

Eric Bledsoe scored 16 points, Brandon Ingram netted 14, Jaxson Hayes scored 13 and Willy Hernangomez had 12 points and 12 rebounds to lead the Pelicans (29-35), who stayed within 3 1/2 games of Golden State for a play-in spot in the Western Conference.

Three of the Pelicans’ final eight games are against the Warriors, beginning with back-to-back games on Monday and Tuesday in New Orleans.

Rookie Anthony Edwards scored 29 points, Karl-Anthony Towns had 28 points and 14 rebounds before fouling out, D’Angelo Russell had 17 points and 11 rebounds but was 1-of-12 on 3-pointers, Naz Reid scored 17 before also fouling out, Juancho Hernangomez scored 14 and Ricky Rubio added 11 points and seven assists to lead the Timberwolves (20-45), who saw their season-best four-game winning streak come to an end.

Williamson’s layup tied the score at 127 with three minutes remaining in overtime, and Bledsoe broke the tie with a 3-pointer. Williamson scored five straight points as New Orleans took a 135-129 lead with 1:38 left.

The Pelicans then scored their final five points on free throws.

There were three lead changes and two ties during the first four minutes of the fourth quarter before Jaden McDaniels’ 3-pointer capped an 11-2 run that gave Minnesota a 117-107 lead midway through the period.

Ingram’s jumper ended a nearly four-minute scoring drought and started a 16-6 run that pulled New Orleans even with 21.9 seconds left. Russell missed a jumper in the final seconds, sending the game to overtime

Ball made a 3-pointer to start the third-quarter scoring and break a 65-all halftime tie.

He made three more 3-pointers as the Pelicans took a 94-86 lead before Minnesota scored eight straight pull even.

The Timberwolves briefly took the lead before Williamson’s driving layup gave New Orleans a 98-97 at the end of the quarter.