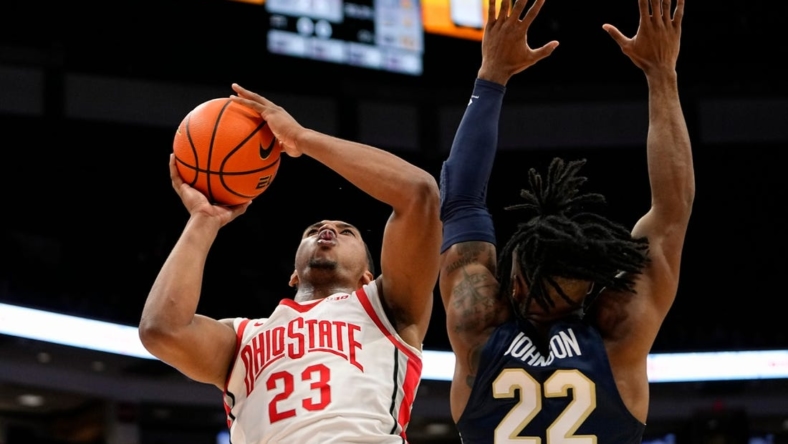 Brice Sensabaugh had 14 points and Sean McNeil added 13 points for the Buckeyes (2-0).

The Buccaneers (1-1) scored the first two points of the game but that was their lone shining moment as Buckeyes, particularly Key, quickly took control.

They went on an 11-0 run with Key putting in six points. By the time he went to the bench for a breather with 11:12 left in the first half, he had 13 points, hitting 6 of 7 from the floor and a free throw as well as grabbing six rebounds for a 23-6 Ohio State advantage.

The Buccaneers could not handle Ohio State’s inside game. They were outscored in the paint 26-10 through 20 minutes, a big reason the Buckeyes made 17 of 33 field goals (51.5 percent).

Charleston Southern, of the Big South, opened the season with an 83-52 win against Toccoa Falls, a member of the Division II-level National Christian Collegiate Athletic Association. It was a stark contrast from Thursday’s opponent, a Big Ten team that reached the second round of the NCAA Tournament last season.

Charleston Southern, which shot 38 percent from the field against Toccoa Falls, struggled for the second game in a row, making 33.8 percent against the Buckeyes.

After making 8 of 34 3-pointers in their opener, the Buccaneers were 5 of 22 Thursday.

Both teams are idle until Wednesday when the Buckeyes host Eastern Illinois while Charleston Southern plays at Tulane.