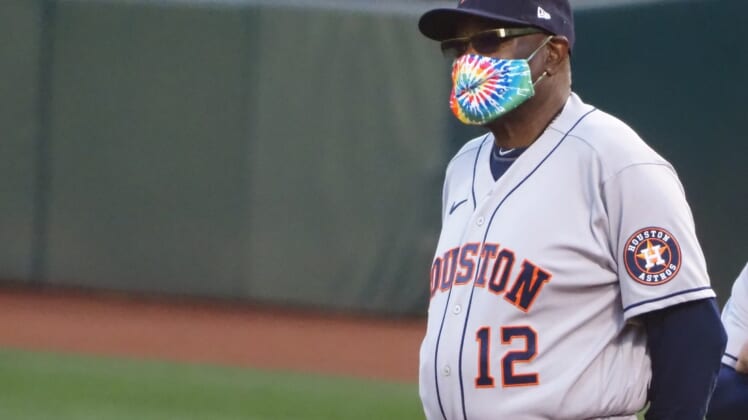 Right-hander Zack Greinke continued to make the San Francisco Bay Area his home away from home Thursday night, throwing six shutout innings while leading the Houston Astros to an 8-1 victory over the Oakland Athletics on Opening Day.

Never pitching with much of a cushion and pulled immediately after Yordan Alvarez’s two-run double gave the Astros a 3-0 lead, the 37-year-old allowed three hits and no walks in his 82-pitch gem. He struck out four.

Michael Bradley and Alex Bregman greeted Oakland’s fourth pitcher, Adam Kolarek, with back-to-back, solo home runs in the eighth inning, breaking the game open at 5-1. Houston poured it on with a three-run ninth.

Selected to make his first Opening Day start, A’s right-hander Chris Bassitt (0-1) kept his team in the game by limiting the Astros to three runs on four hits in 5 1/3 innings. He struck out three and walked two.

After an RBI infield out by Bregman opened the scoring in the fourth inning, the Astros lengthened their lead and knocked out Bassitt with a two-run sixth.

The A’s did their only scoring immediately after Greinke (1-0) was pulled. They got within 3-1 in the seventh on a sacrifice fly by Matt Chapman, then put the potential tying run on the bases before Enoli Paredes struck out Jed Lowrie and Sean Murphy to preserve the lead.

Brantley had three hits and Alvarez drove in three runs for the Astros, who finished seven games behind the A’s in the AL West last season. Bregman added two hits and two runs for Houston, while Brantley and Jose Altuve also scored twice.

Ramon Laureano and Chad Pinder had two hits apiece for the A’s, who were out-hit 9-6.