Hype around OTAs is often overblown. Click here to find out why New York Jets quarterback Zach Wilson is an exception to that general rule so far.

The New York Jets are wasting no time preparing Zach Wilson to start as an NFL rookie, and the No. 2 overall pick is already impressing observers at OTAs.

Wilson is, by all accounts, an avid student of the game, relentlessly watches film, and has the talent to back up that work ethic. Connor Hughes of The Athletic actually provided a minute-by-minute breakdown of Wilson’s recent Jets OTA practice to close out this week, and the results were extremely impressive.

In 7-on-7 drills, Wilson had just two passes hit the ground, and even then, tight end Chris Herndon was able to get two hands on the ball on one, and it took a strong defensive play on a deep throw to break up Wilson’s downfield launch.

For the rest of the session open to the media, Gang Green’s new hope at quarterback didn’t miss a throw. 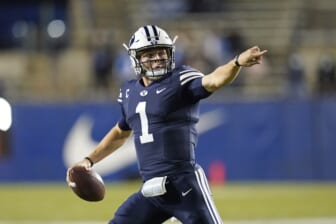 Why you should buy Zach Wilson’s Jets OTA hype

OK, so it’s admittedly a slow time in the NFL offseason, but New York is always a big draw, and Wilson’s arrival is among the most compelling storylines in the league.

It’d be more concerning if Wilson wasn’t lighting it up in OTAs in 7-on-7 scenarios. However, this is a new playbook he’s picking up, he’s still getting used to a whole new cast of receivers, and there’s tons of scrutiny on his every move.

None of that seems to faze the BYU star thus far.

What stands out most, though, is the fact that Hughes — who’s covered the Jets for quite some time and has seen a lot of failed QBs come and go — hasn’t seen a young signal-caller step in and take such command this early on:

Wilson received every first-team rep. I can’t remember seeing that before — and there have been quite a few rookies over at One Jets Drive. Almost always the player with some NFL experience begins the offseason as the starter, then hands it over at some point in training camp. Even if the player isn’t good. It’s slightly uncommon to see a rookie receiving any first-team reps at this point. But all of them? It’s clear that this is Wilson’s job.

That’s right. Even Sam Darnold, who was picked third overall in 2018, took a while to earn his spot with the first-team offense.

Maybe the Jets would’ve been better served by handing the keys to Darnold sooner. Then again, the supporting cast around him was never going to be conducive to success.

Before you sneer at those stat projections, bear in mind that a 100.7 passer rating isn’t as gaudy as it used to be. Wilson would’ve ranked 11th in the NFL in that category in 2020 if he’d hit that mark, and remember, the Jets are likely to be trailing a lot this season, meaning Wilson will pick up some easy throws when defenses play off coverage.

Wilson is uncannily accurate, can make ridiculous off-platform throws and is athletic enough to extend plays with his legs and create huge gains on the ground or through the air. Hence the rosy statistical forecast.

It’s not all about Wilson, though — the Jets have done a fine job surrounding him with talent this offseason.

By trading up for USC offensive lineman Alijah Vera-Tucker and drafting Ole Miss receiver Elijah Moore, general manager Joe Douglas ensured with his 2021 draft class that Wilson would have some young players to grow with and to support him for years to come.

So between those personnel improvements, and a new coaching staff led by Saleh that’s in lockstep with the front office in their belief in Wilson, Jets fans shouldn’t be shy about getting hyped for their new QB. 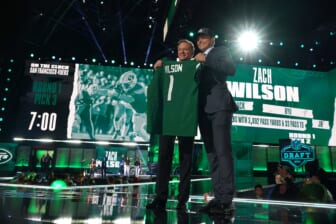