Zach Parise scores in OT to lift Isles over Columbus 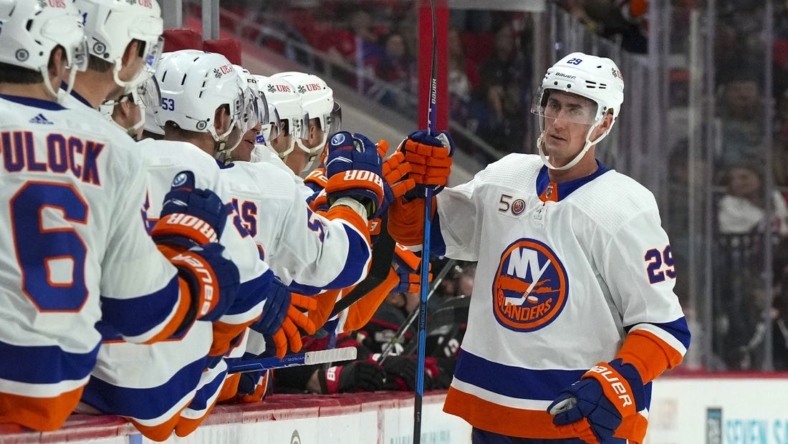 Zach Parise scored 39 seconds into overtime Saturday night for the host New York Islanders, who overcame a trio of one-goal deficits to beat the Columbus Blue Jackets 4-3 in Elmont, N.Y.

Parise fired a shot beyond the glove of Blue Jackets goalie Joonas Korpisalo to cap an end-to-end rush and give the Islanders their eighth win in 10 games.

Brock Nelson scored twice in the second while Scott Mayfield collected a goal in the third for the Islanders. Goalie Ilya Sorokin recorded 26 saves.

Cole Sillinger and Emil Bemstrom scored in the second, and Marcus Bjork, making his NHL debut, scored in the third for the Blue Jackets, who have lost six of seven. Korpisalo made 41 saves.

The Islanders outshot the Blue Jackets 10-6 in a scoreless first before the teams traded four goals in a fast-paced second.

Islanders defenseman Alexander Romanov was whistled for holding 1:16 into the period to generate the power play that yielded the goal by Sillinger. He collected the rebound of a shot by Yegor Chinakhov and had his first attempt turned away by Sorokin before he tucked home a second shot around Sorokin’s skate with eight seconds left on the man advantage.

The Islanders tied the score on Nelson’s first goal a little more than four minutes later.

Mayfield, stationed at the blue line, threaded a pass to Nelson, who got behind Jack Roslovic to the left of Korpisalo. In one motion, Nelson put his stick down and flicked the puck past a sprawling Korpisalo at 7:27.

The Blue Jackets took the lead again fewer than three minutes later when Bemstrom took a pass from Gustav Nyquist, bore in on Sorokin and beat him with the backhand with 9:45 left.

Nelson again collected the game-tying score with 44.6 seconds remaining when he put back the rebound of Sebastian Aho’s shot.

The teams again traded goals within a span of a little more than three minutes just before and after the midway point of the third. Bjork scored his milestone goal when he collected the carom of a pass by Bemstrom off the boards and fired a slap shot past Sorokin at the 9:38 mark.

Mayfield pounced on the rebound of a shot by Mathew Barzal and sent a backhand past Korpisalo and into the net with 7:09 remaining.