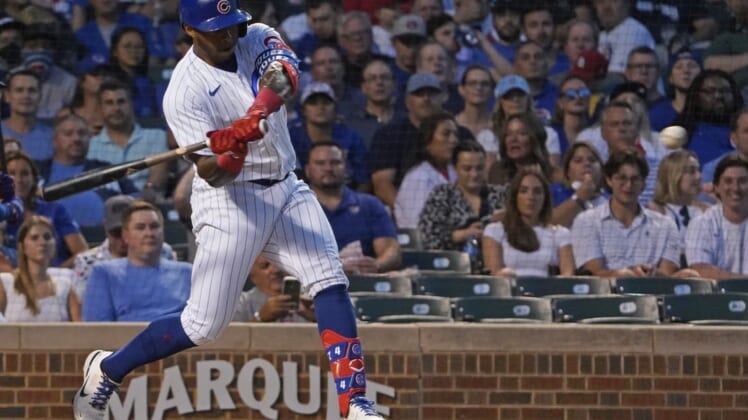 McKinstry, acquired by the Cubs in the deal that sent reliever Chris Martin to the Los Angeles Dodgers on July 30, recorded an RBI groundout during a three-run second inning, then clubbed a two-run shot off St. Louis starter Miles Mikolas (10-10) in the seventh.

Chicago starter Luke Farrell allowed one run over 4 1/3 innings in his 2022 major league debut. The 31-year-old right-hander, promoted from Triple-A Iowa before the game, gave up six hits, but only Lars Nootbaar’s fifth-inning homer. He didn’t issue a walk and struck out three.

Cubs relievers Rowan Wick (4-6), Mark Leiter Jr., Brandon Hughes and Kervin Castro held the Cardinals to three hits in 4 2/3 scoreless innings. The St. Louis offense had recorded 16 hit during a 13-3 win on Tuesday night that gave them a doubleheader split.

After going 4-for-5 in the Tuesday nightcap, St. Louis’ Corey Dickerson went 4-for-4 on Wednesday, giving him eight consecutive hits. St. Louis has dropped two of three following its season-high, eight-game winning streak.

Chicago loaded the bases against Mikolas with no outs in the second inning. The Cubs then got RBI groundouts from Yan Gomes and McKinstry, which sandwiched Nelson Velazquez’s run-scoring double.

After Nootbaar’s homer made things tighter, the Cubs added some insurance in the seventh thanks to a rare St. Louis defensive miscue.

With one out, Brendan Donovan, starting at first base while Cardinals star Paul Goldschmidt got the night off, flubbed Gomes’ bouncer. Two batters later, McKinstry kept the ball just inside the right field foul pole for his first home run as a Cub and second of the season to make it 5-1.

Mikolas was done after 6 2/3 innings, having allowed five runs (three earned) on six hits and a walk while striking out three.

St. Louis star Nolan Arenado was ejected in the third inning for arguing with plate umpire John Libka after striking out.