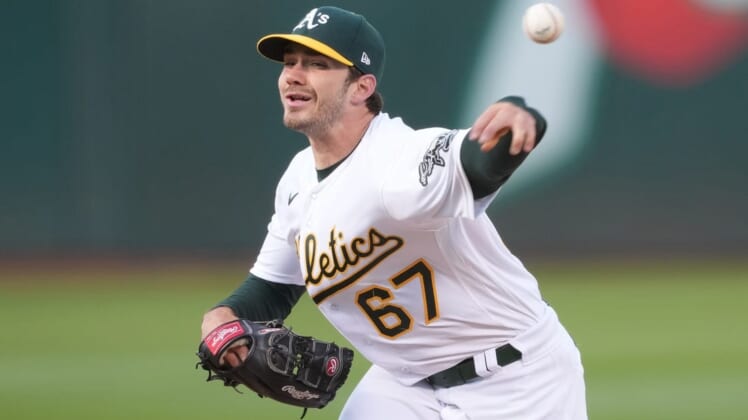 Left-hander Zach Logue will attempt to fill the big shoes of ailing Oakland Athletics ace Frankie Montas when he gets the unenviable task of trying to take down the visiting Houston Astros on Saturday afternoon.

Houston made it four straight over the A’s in Oakland this season in the series opener Friday, getting home runs from Alex Bregman and Martin Maldonado in an 8-3 win.

Oakland’s top pitcher complained of discomfort behind his right shoulder in the first inning of his Sunday start in Seattle. He took a cortisone shot to help ease the pain, and the A’s hope to have him back in the rotation at some point next week.

Meanwhile, Oakland manager Mark Kotsay reported before Friday’s game that Logue (2-4, 5.47 ERA) would be promoted from Triple-A Las Vegas to take Montas’ spot in the middle game of the series.

The 26-year-old rookie appeared in six games, five as a starter, for the A’s in April and May. He recorded a win in his major league debut in relief on April 19 against the Baltimore Orioles, then got his first — and only — victory as a starter when he threw seven shutout innings against the host Detroit Tigers on May 11.

“Zach has been here. He’s had his opportunities, and he’ll go ahead and get one (Saturday),” Kotsay said. “We’re looking forward to him being on the mound again.”

Logue will see an Astros team that not only has won four straight from the A’s but has accumulated fewer than half as many losses (28) as its longtime rival (57) this season.

Houston had more to celebrate than just another win Friday. It was announced before the game that second baseman Jose Altuve was selected to make his fifth All-Star Game start later this month.

The All-Star honor is Altuve’s eighth, allowing him to pass Craig Biggio for the franchise lead.

“It means a lot,” Altuve said of No. 8. “Obviously, Craig is a Hall of Famer, so every time that someone says my name next to his, I feel honored.”

He didn’t get a decision in his most recent outing, a 4-2 win over the Los Angeles Angels last Sunday in which he struck out a career-best 13 in six innings. Valdez allowed two runs on three hits and five walks.

The 28-year-old is 1-2 with a 3.35 ERA in seven career regular-season games, including five starts, against the A’s. The win came on May 30 by a 5-1 count at Oakland as Valdez he threw a complete game, limiting the A’s to two hits. He walked three and fanned seven.