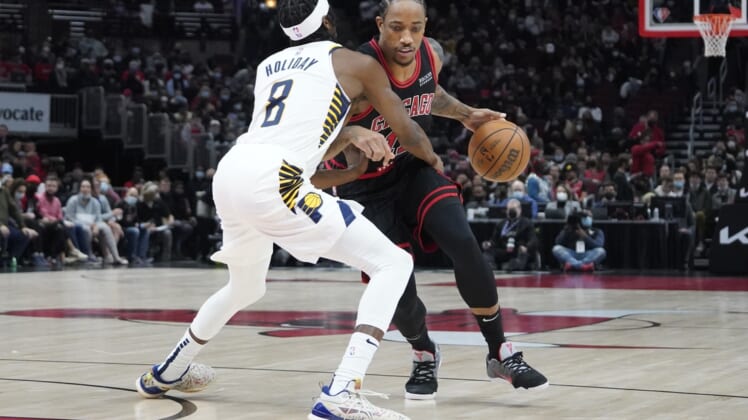 Zach LaVine scored 32 points in his return from a two-game absence and DeMar DeRozan added 24 as the Chicago Bulls posted a 113-105 win over the visiting Indiana Pacers on Sunday night.

Nikola Vucevic had 16 points and 15 rebounds for Chicago, which won its third straight and avenged a 32-point loss to the Pacers on Nov. 22. The Bulls led by as many as 18 in the first half.

Caris LeVert had 27 points and nine assists to lead Indiana. Myles Turner added 19 points while Chris Duarte scored 12 of his 16 points in the second half.

Domantas Sabonis returned after missing one game due to a right-calf injury and finished with 14 points and 16 rebounds. Justin Holiday added 10 points for the Pacers.

LaVine returned from the league’s health and safety protocols and was 12-of-18 shooting from the field, including 5-of-9 from 3-point range.

Vucevic had 13 points and seven rebounds in the first half for the Bulls, who held a 63-48 advantage at the break after shooting 63.4 percent from the field.

Chicago pushed the lead back to 16 before Indiana pulled to 87-79 by the start of the fourth quarter. The Bulls committed six turnovers in the third quarter, matching their total for the first half.

The Bulls played without Lonzo Ball, Alfonzo McKinnie and Tony Bradley, all of whom are in the league’s health and safety protocols. Guard Alex Caruso is out with a sprained left foot.

Bulls assistant Chris Fleming served as acting head coach in place of Billy Donovan, who entered the health and safety protocols on Friday.