Zach LaVine pours in 30 as Bulls earn split with Raptors 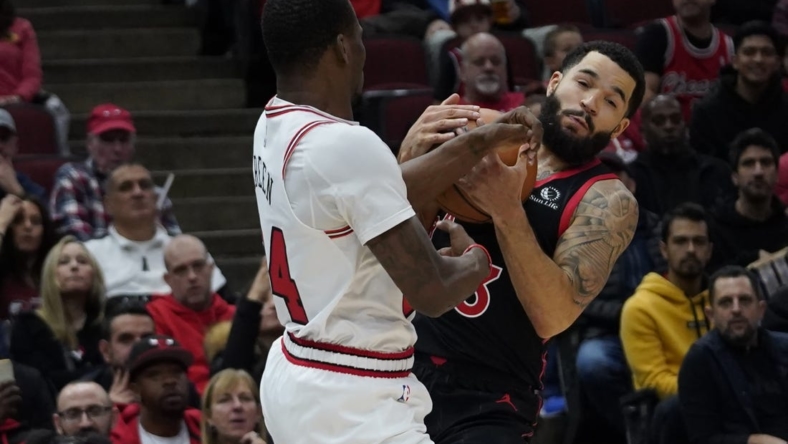 Zach LaVine scored a season-high 30 points and Nikola Vucevic contributed 15 points and 13 rebounds to boost the host Chicago Bulls to a 111-97 win against the Toronto Raptors on Monday night.

Chicago earned a split of the home-and-home, back-to-back set after losing 113-104 in Toronto on Sunday.

A DeRozan three-point play put Chicago ahead 56-43 with 2:43 remaining in the second quarter. The Raptors responded to their largest deficit to that point with a 10-0 run that included six points from Trent.

A LaVine basket with 1.4 seconds to go ended the surge and gave the Bulls a 58-53 lead at the break.

Turns out the blip of momentum carried over to the start of the third quarter, which Chicago opened with a 10-2 run.

One night after allowing the Raptors to finish the game on a 20-9 run, the Bulls closed out their foes. Another strong showing from the free-throw line boosted Chicago, which was 18-for-22 from the line, a rate of 81.8 percent.

The Bulls have shot 80 percent or better from the line in 11 straight games, matching a franchise mark set last season.

LaVine returned to the lineup after missing the Sunday game as the team manages his workload following offseason surgery on his left knee.