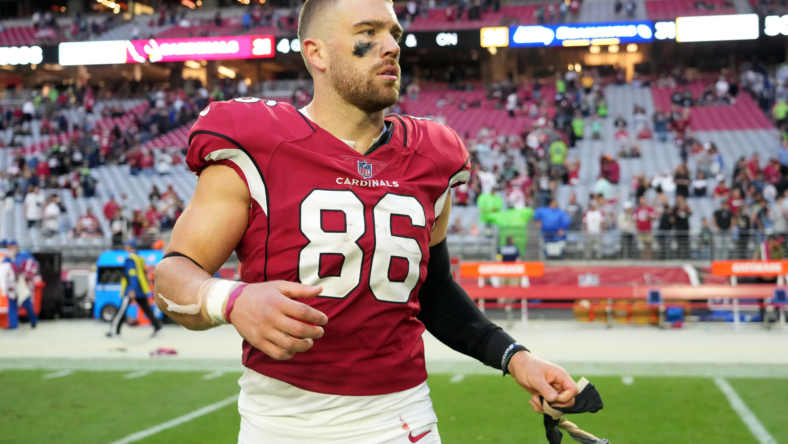 The Arizona Cardinals just can’t catch a break. That now includes leading pass-catcher, tight end Zach Ertz, being lost for the remainder of the season with a knee injury.

A three-time Pro Bowler dating back to his days with the Philadelphia Eagles, Ertz pulled up lame with a knee injury in Arizona’s Week 10 win over the Los Angeles Rams. He was seen in a knee brace following the game.

Now comes this piece of information from NFL Media’s Ian Rapoport indicating that Ertz is in fact done for the remainder of the season.

There’s been a lot made about the turf situation at SoFi Stadium in Southern California where Ertz suffered the injury on Sunday. Multiple players have spoken out about artificial turf and how it has caused an increased number of lower-body injuries. Ertz could be the latest example of this.

From a micro perspective, it’s hard not to feel bad for Ertz. We’re talking about a respected 10-year veteran who continues to play at a high level. There’s no telling how his 32-year-old body will respond to this significant injury.

Arizona is already without star wide receiver Marquise Brown, who went down with a foot injury back in Week 6. It’s still going to be a couple weeks before he’s able to return to action.

For a 4-6 Cardinals team, these injuries could end up leading to a lost season. In fact, Ertz took over for Brown as Arizona’s leading pass-catcher once the latter went down to injury.

Remember, star quarterback Kyler Murray missed Sunday’s game with a hamstring injury. It’s not yet known whether he will be able to go next Monday night in Mexico City against the division-rival San Francisco 49ers.

For now, the Ertz injury adds another layer to widespread issues Arizona has dealt with through the first 10 weeks of the season.