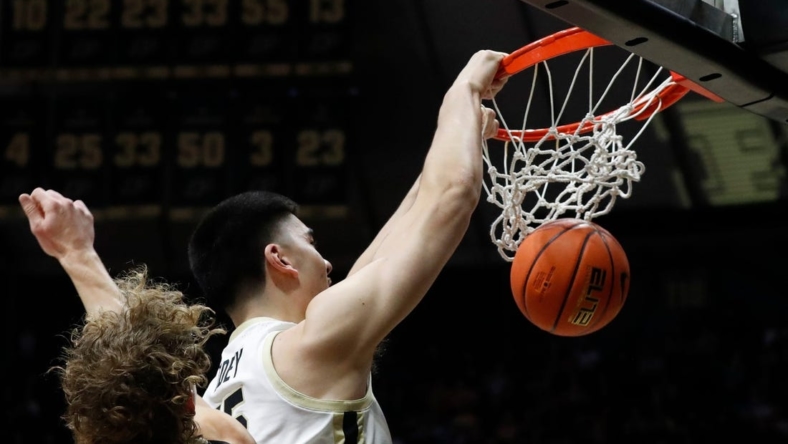 Zach Edey canned his first nine shots on his way to a career-high 30 points to spark Purdue to a 63-44 victory over Austin Peay in nonconference play Friday night in West Lafayette, Ind.

The 7-foot-4 third-year center finished 12 of 13 from the field with a game-high 11 rebounds as the Boilermakers (2-0) controlled the game despite missing their first 16 3-point attempts. No other Purdue player scored more than five points.

Purdue pounded the ball inside to Edey from the outset. He scored in the paint on the Boilers’ first two possessions and produced four baskets in the first five-plus minutes as Austin Peay stuck with a man-to-man defense and occasional help in the post.

Meanwhile, Hutchins-Everett scored Austin Peay’s first 10 points to keep the patient Governors — who lost their opener by 49 points at North Carolina State — within striking distance. No other Governor scored until Robinson’s breakaway jam cut Purdue’s lead to 16-12 with 9:00 left in the first half.

Then the Boilermakers held the Governors scoreless for nearly seven minutes to take a 31-16 halftime lead. The teams headed to the locker room shooting a combined 1 of 24 from 3-point range.

Edey pushed Purdue’s lead to 35-18 with 18:32 to go when he slammed home his own miss, but Austin Peay sliced the deficit to 36-26 on 3-pointers by Cameron Copeland and Hutchins-Everett and a slashing layup by Sean Durugordon.

The Governors never found a way to cut the margin to single digits, though. Purdue finally sank its first 3-pointer when sixth-year senior David Jenkins Jr. hit from the corner with 7:44 left in the second half to move the lead to 47-32.