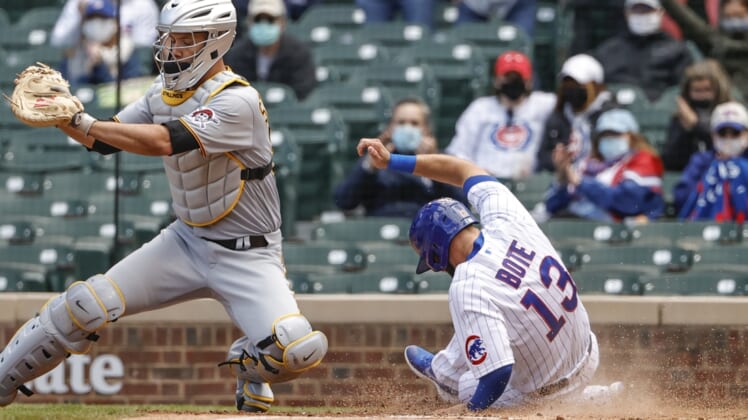 Joc Pederson was 3-for-4 with an RBI single and run scored for Chicago, which won its fourth straight game despite giving up two ninth-inning runs. Rex Brothers got the final out for his first save since 2013.

Davies (2-2) gave up five hits, all singles, with one walk and one strikeout.

Ka’ai Tom had an RBI single for Pittsburgh, which has lost seven of eight.

Pirates starter Trevor Cahill (1-4) pitched five innings. He gave up three runs, two of them earned, and eight hits with one walk and two strikeouts.

The Cubs scored once in each of the first three innings.

In the first, Pederson led off with a single to left. He moved to second on Kris Bryant’s groundout and to third on Javier Baez’s groundout. Pittsburgh right fielder Phillip Evans then misplayed a ball hit by Anthony Rizzo, allowing Pederson to score for a 1-0 Cubs lead.

David Bote hit a one-out base hit in the Chicago second. Davies bunted him to second before Pederson singled to right to make it 2-0.

In the third, Baez reached on an infield single and advanced to second on Rizzo’s single to right. They advanced to second and third on a Cahill wild pitch. After Willson Contreras struck out, Baez scored on Matt Duffy’s sacrifice fly to center for a 3-0 edge.

For his final inning of work, Davies produced a little magic in the seventh to get out of a bases-loaded jam with no outs.

Colin Moran led off with an infield hit and Evans singled him to second before Jacob Stallings walked. Davies turned Todd Frazier’s comebacker into a fielder’s choice by throwing Moran out at home. Tom then hit into an unconventional double play from Davies to home to force out Evans to first.

Pittsburgh cut it to 3-2 in the ninth as Moran, who led off with a single off Andrew Chafin, moved to third on Stallings’ double and scored on Frazier’s groundout. Stallings scored on Tom’s bloop single before Brothers eventually secured the final out after allowing a single and batter.