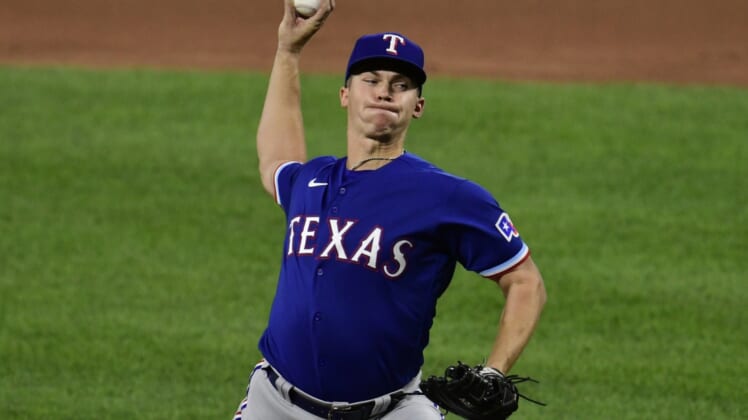 Lowther (1-2) allowed three hits, struck out seven and walked two in his fifth big-league start. The left-hander began the night with a 9.61 ERA.

Ryan Mountcastle and Austin Hays homered for Baltimore (49-104) in the opener of the four-game series. The Orioles won for just the third time in 13 games.

Rangers right-hander Glenn Otto (0-3) was also aiming for his first major league victory in his fifth start. He gave up two runs and five hits in five innings, striking out seven and walking one.

Baltimore opened the scoring in the fourth inning.

Ryan McKenna doubled with one out and moved to third on a single by Jahmai Jones. Richie Martin then laid down a safety squeeze and McKenna scampered home for a 1-0 lead.

Lowther, a 25-year-old left-hander, used the strikeout to get out of early trouble.

After the Rangers (55-98) put a runner in scoring position with one out in the first, Lowther struck out the No. 3 and 4 hitters, Andy Ibanez and Adolis Garcia.

Texas put its first two hitters on base in the second, but Lowther again struck out back-to-back batters before fielding a comebacker to end the inning.

Mountcastle hit a 404-foot, opposite-field home run with two outs in the fifth to make it 2-0. It was the 31st home run of the season for Mountcastle, extending his franchise rookie record.

Mike Baumann tossed a scoreless sixth inning for Baltimore. He was replaced with two on and one out in the seventh by Cole Sulser, who got the next two batters out and then pitched a 1-2-3 eighth.

Tyler Wells worked around a single in the ninth for his fourth save.

The Rangers took their five consecutive loss and fell for the eighth time in nine games.