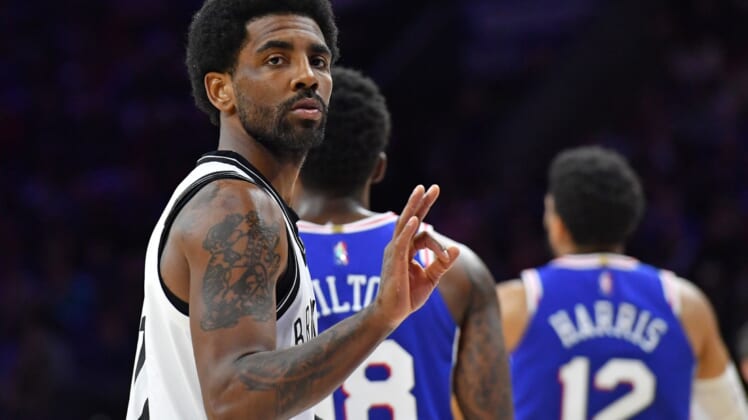 For a promising young team that prizes game experience against elite talent, the Orlando Magic are about to hit the jackpot for the second time in three days.

The Magic are at a stage in their development where they welcome the opportunity to host Kevin Durant, Kyrie Irving and the Brooklyn Nets on Tuesday night.

Brooklyn, which has won two of the three meetings with Orlando this season, occupies eighth place in the Eastern Conference with 14 regular-season games remaining.

The Nets are riding a three-game winning streak that raised their record back above the .500 mark, highlighted by Thursday’s 29-point rout of Philadelphia.

Irving, who continues to play in only away games due to COVID-19 protocol in New York, scored 50 points in a win at Charlotte last Tuesday. And Durant’s 53-point performance Sunday against the New York Knicks allowed the Nets to become the first team in NBA history to have multiple players post a 50-point game over a three-game span, according to ESPN Stats & Info.

Durant made 19 field goals, including four of Brooklyn’s six 3-pointers, and 11 free throws in a 110-107 victory over New York.

“Kevin was unbelievable, obviously carried us, made a lot of big plays — rebounds, assists — the whole deal, so he was Kevin Durant on full display,” Brooklyn coach Steve Nash said. “But I think also, you know, you gotta tip your hat to all the other guys that did so many things out there.”

The Magic, officially eliminated from playoff contention, have reached the third leg of a six-game homestand. Coach Jamahl Mosley’s team dropped to 8-24 at home with Sunday’s 116-114 overtime loss to Philadelphia as the 76ers overcame a 17-point, first-half deficit.

Orlando shot nearly 42 percent from 3-point range with 18 made triples and held decided advantages in bench points (51-19) and fast-break points (19-3). But the Magic’s misfortune against Philadelphia continued as the Sixers swept the four-game season series.

The Sixers’ one-two punch of Joel Embiid and Harden combined for 61 points, including 28 at the free-throw line, where Philadelphia made 32 of 37 attempts.

“I think it’s extremely valuable,” Mosley said postgame Sunday. “Our guys are gaining execution experience, understanding what it’s like to play against a high-level playoff team. And these guys did a great job of executing down the stretch, finding the looks that you need and want.”

Magic rookie guard Jalen Suggs scored all 10 of his points in the first quarter Sunday before aggravating a sprained right ankle and exiting in the second half. Wendell Carter Jr. paced the Magic with 23 points and 12 rebounds for his 31st double-double.

With Simmons (return to competition reconditioning/back soreness) still sidelined, Brooklyn might have Seth Curry (ankle) back on the floor Tuesday after he sat out Sunday’s contest.