Young linebackers need to step up in 3rd, and last, preseason game 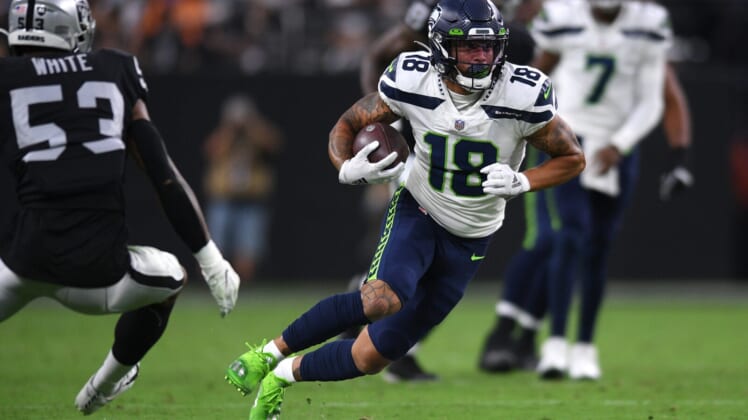 The injury bug has officially hit the Raiders, primarily in the linebackers’ room, and some of the young linebackers still on the roster have a chance to be noticed.

Head coach Jon Gruden said linebackers Nick Morrow and Javin White are going to miss time as other players will have to step up.

“They’ll be out for a while,” Gruden said. “Looks like Morrow will be out a little bit longer than White. That’s unfortunate, but we’ll have to continue to develop our young linebackers or perhaps find another.”

A couple of those players expected to step up are Tanner Muse and Divine Deablo.

Gruden said Muse has played well in the last couple of games and that has benefitted him, especially for not playing in 2020.

“He’s had to (because) all the linebackers got hurt,” Gruden said. “White went down, Darron Lee was out, Kwiatkoski was out, Morrow was out. Second half, who’s going in, who’s going inside? Deablo’s out, so Tanner went inside and give him credit. He’s playing will, auto, he’s playing two or three positions and he’s a very good special teams’ player.

“And he needs to play. He didn’t play at all last year and he hasn’t really been linebacker for more than six months. So, this is good for him.”

Against the Rams last Saturday, he recorded three tackles and a half sack in the 17-16 win.

On the bright side to the injuries, Gruden said he hopes Kwiatkoski will be ready for next week.

Young linebackers aren’t the only positives on defense

Another positive on defense has been defensive end Maxx Crosby, who started in all 16 games last year and recorded 38 tackles.

Although he has not seen action in either of the team’s two preseason games, that has not stopped Gruden from noticing him, like rookie cornerback Nate Hobbs.

“He’s a weird guy, he’s a fun guy, he’s a hell of a football player and thank god we have him.”

The next step to announcing the 2022 NFL Hall of Fame candidates was unveiled on Tuesday.

Former Oakland and Los Angeles Raiders wide receiver Cliff Branch, who passed away in 2019, was named a senior finalist by a panel of Hall of Fame Selectors on Tuesday.

The three-time Super Bowl Champion spent his entire 14-year career with the Raiders and played in 183 games.

Gruden said defense always had to keep track of Branch on the field and deserves to be elected in.

“He was a threat,” Gruden said. “I don’t think Al Davis – I can’t speak for John Madden or any of the guys that coached him – but I don’t think you can measure his impact in catches in Pro Football Focus statistics. He was a threat to go all the way all the time and if you didn’t account for him, there were going to put a bomb on him, they were going to throw it.

“The fact that he was a great guy, a world champion and a difference as a down the field receiver, it’d be great to see him get in the Hall of Fame.”

The next step to the Hall of Fame of voting is when the 49-member committee meets next year, prior to Super Bowl LVI. Branch must receive 80% of the vote (40 votes minimum) to be elected. The Class of 2022 will be inducted into the Pro Football Hall of Fame next summer in Canton, Ohio.