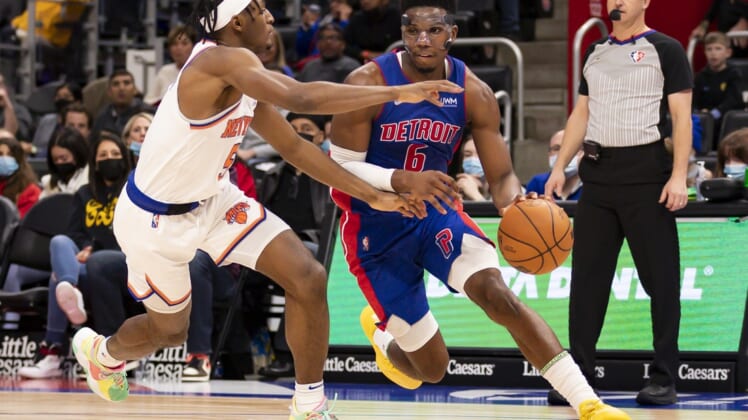 New York Knicks coach Tom Thibodeau has been forced to rely on younger players this week. So far, it’s working out quite well.

The Knicks (32-42) have won two straight, including a stirring comeback against the Miami Heat on Friday. They’ll now travel to Detroit to face the Pistons (20-54) on Sunday afternoon.

“They are where we want to be — top of the East,” Quickley said. “To come out here against a great team and get a big win, that’s what we’re capable of doing. Playing fast, playing free, that’s where we’re at an advantage. We like to play with a lead but if we’re down, we try not to panic.”

The Knicks, who defeated Charlotte on Wednesday, kept their faint playoff hopes alive with the back-to-back triumphs. They’ve done it without leading scorer Julius Randle, who has missed the last three games with a sore right quad. His replacement, second-year forward Obi Toppin, has averaged 14.3 points and 8.7 rebounds in his absence.

Thibodeau would rather have Randle available but was pleased with the way his players responded in the second half.

“It’s a long season,” Thibodeau said. “You need everyone. That’s why you have a bench and depth. Depth is critical in today’s NBA.

“They were the same young legs we had in the first half,” he added. “You guys are trying to nitpick this, nitpick that. You need everyone across the course of a season. We love our young guys. They bring it every day. They’re supposed to bring energy.”

New York defeated Detroit twice in December, 105-91 at home and 94-85 on the road. In the latter, Alec Burks scored 34 points off the bench for the Knicks.

The Pistons have lost seven of their last nine games. They were defeated at home by Washington, 100-97, on Friday.

Like the Knicks, the Pistons could be without their leading scorer on Sunday. Jerami Grant sustained a calf strain in the first quarter against the Wizards and did not return.

His backup, Marvin Bagley III, topped the Pistons with 25 points and Cade Cunningham had 22 points, nine assists and seven rebounds.

Like the Knicks, the Pistons erased a 17-point deficit on Friday. However, they were unable to finish off the rally.

“I liked the way we came back, but we can’t dig a hole if we’re building winning habits,” coach Dwane Casey said. “You can’t give a team a 35-point (second) quarter and come out playing as soft as we did in the first half. We’re not in a position where we can ease into a game. That’s what I’m disappointed about.”

Detroit outscored Washington 54-32 in the paint but made just 6 of 32 3-point attempts.

“You’re not going to beat too many teams being 18 percent from three,” Casey said. “We had some great looks. (It was) one of those games offensively.”