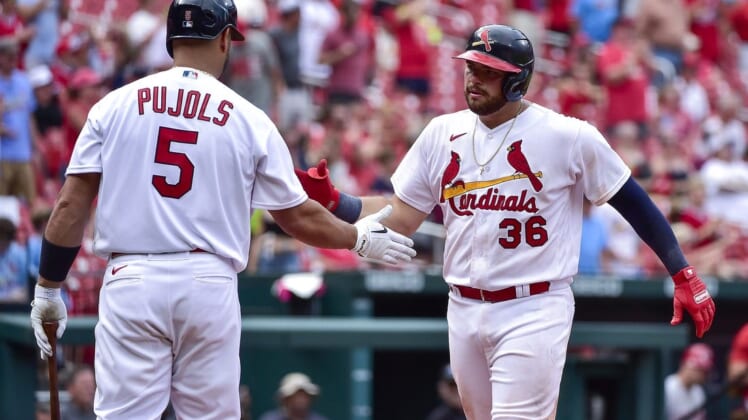 Between a rainout and the four-day All-Star break, the visiting St. Louis Cardinals and Cincinnati Reds will be well rested when they continue their wraparound series Friday as the division rivals open a three-game weekend set.

The Cardinals defeated the Reds twice at St. Louis last weekend before Sunday’s game between the teams was postponed.

The Reds begin a 10-game homestand that will see them conclude a July schedule in which they play 21 of 26 games at home. For the Cardinals, the weekend series marks the beginning of a three-city, eight-game road swing through Cincinnati, Toronto and Washington.

As was the case last season when they played the Milwaukee Brewers seven straight games before and after the All-Star Game, Cincinnati will open the post-break portion of its schedule against the same team it played heading into the hiatus.

The Cardinals have taken six of the first eight meetings this season between the two NL Central rivals.

Despite the two losses in St. Louis, the Reds are still much improved following their 3-22 start. They swept the Tampa Bay Rays at home July 8-10 and took two of three from the New York Yankees on the road July 12-14.

“Everybody in the clubhouse believes that we’re a lot closer than our record says,” Reds manager David Bell said. “We’re a couple of steps away from being a really good team. You can’t talk about it. You have to go out and do it. It’s nice to be rewarded with some wins of late.”

The Reds will send rookie Graham Ashcraft (4-2, 4.55 ERA) to the mound for the 11th start of his career and second against St. Louis. He had a no-decision on June 12 in Cincinnati’s 7-6 win over the Cardinals, allowing four runs and nine hits in just 4 2/3 innings.

The Cardinals ended Ashcraft’s run of three quality starts, which had announced his impressive arrival. He is 1-2 with a 6.97 ERA in six starts since his 3-0 start.

The Cardinals have not announced a probable pitcher for Friday’s series opener, but it is expected to be right-hander Adam Wainwright (6-7, 3.00).

Left-hander Steven Matz was scheduled to pitch Sunday’s series finale before it was rained out. Matz was hoping to return to MLB action for the first time since May 22, when he left a start with shoulder discomfort.

Cardinals manager Oliver Marmol said Matz’s next start will likely come on Tuesday or Wednesday at Toronto against the team he won 14 games for in 2021 before signing his four-year, $44 million deal with St. Louis last November.

The Cardinals reached the 50-win mark before the All-Star break for just the 14th time in franchise history and are a half game behind the Brewers in the NL Central.

The Cardinals remain near the top of the division despite 13 rookies making their MLB debuts while filling in for injured regular stars such as Yadier Molina, Matz, Jack Flaherty, Tyler O’Neill and Harrison Bader.

“I feel pretty good about it, because when you look at the amount of injuries that we had, you have to have some depth in order to stay afloat, and we’ve been able to do that,” Marmol said. “Have we absolutely run through our division? No, but at the same time, we’ve been able to see (Brendan) Donovan, (Nolan) Gorman and (Juan) Yepez.

“The names are common to us now, but the reality is (rookies) have stepped up and allowed us to be competitive. Now, going into the second half, we’ve got our guys rested and healthy and we can make a run at it.”