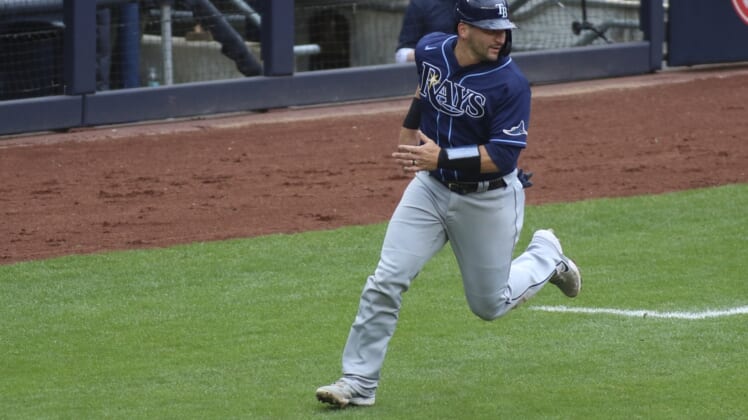 Yoshi Tsutsugo hit a tiebreaking double with one out in the seventh inning off Gerrit Cole, lifting the visiting Tampa Bay Rays to a 4-2 victory over the struggling New York Yankees on Sunday afternoon.

Cole (2-1) retired 13 straight hitters before Joey Wendle scorched a single up the middle. Three pitches later, Tsutsugo laced a 1-1 changeup to to the warning track in right-center field, allowing Wendle to score standing up from first.

Yandy Diaz hit an RBI single and Manuel Margot added a sacrifice fly in the third for the Rays, who are 15-3 in the past 18 regular-season meetings. Including their win in the American League Division Series, the Rays are 18-5 in the past 23 games with the Yankees.

Wendle added a homer in the ninth inning off Darren O’Day.

Giancarlo Stanton homered in the second inning and DJ LeMahieu hit a game-tying RBI single in the fifth, but the Yankees dropped to 5-10 — their worst 15-game start since 1997. New York also lost its fifth straight and dropped to 2-8 in its past 10 games while hearing boos in the later innings from the limited capacity crowd of 10,606.

After Andrew Kittredge opened the game by allowing Stanton’s homer over 1 2/3 innings, Ryan Yarbrough (1-2) allowed a run on two hits in five frames. Throwing mostly cutters and changeups, Yarbrough struck out four, walked two and improved to 24-5 as a reliever.

Diego Castillo retired LeMahieu to end the seventh inning with a runner on and then fanned Aaron Judge and Stanton in a hitless eighth. Jeffrey Springs needed 12 pitches in a perfect ninth for his first career save.