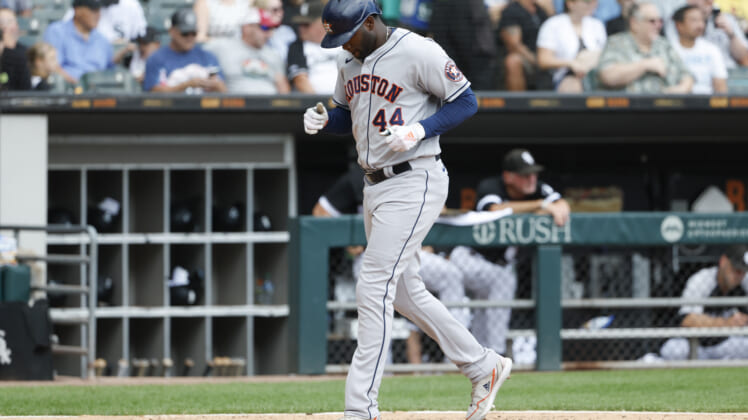 The Houston Astros experienced a frightening moment on Friday night when their MVP contending slugger Yordan Alvarez had to leave the ballgame in the fifth inning vs the Braves. Alvarez was immediately transferred to a local Atlanta hospital and is now being treated for what is being labeled an illness.

The Astros had already been short on outfielders, so Alvarez’s absence came at a bad time. But that’s only secondary to his health, so they did what had to be done.

Mauricio Dubon replaced Alvarez in the outfield, but he too had to leave the game after losing a battle with the center field fence. Jake Meyers, the last remaining outfielder, had to replace Dubon.

Alvarez is in the midst of the best season of his four-year career, and the Astros are surely hoping for a quick recovery as they continue their hunt for October. The ‘Stros have a 10.5 game lead in the AL West with 41 games left to play in their season, but Alvarez has obviously been a boon to their success.

After the game concluded, manager Dusty Baker gave us all the update we were waiting on, saying Alvarez is stable and his vitals are good. He simply explained Alvarez was experiencing a shortness of breath.

There have been no further updates to the status of Alvarez, but it sounds as if he avoided anything major and should be able to escape a stint on the injured list.

The Astros resume play tonight at 7:15 PM ET once again against the Atlanta Braves, on FOX. It is unknown whether Alvarez will be in the lineup to face Spencer Strider. We should get an update on Alvarez again later today.