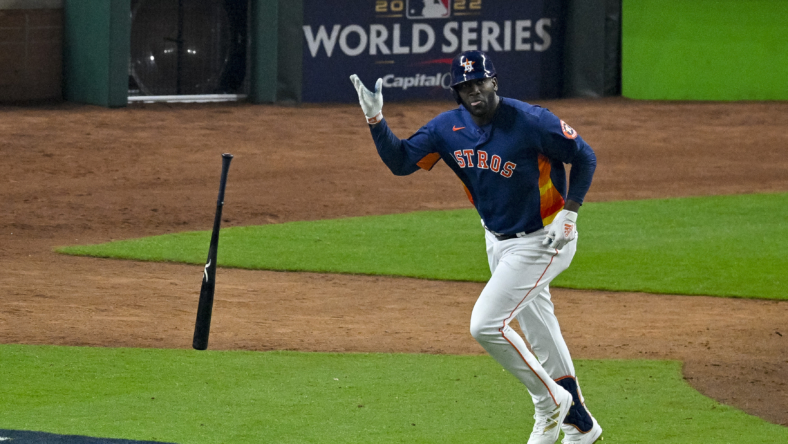 Minute Maid Park is roaring on Saturday night as Game 6 of the World Series brings the Philadelphia Phillies on the road, looking to tie the set at three wins a piece. Except, Yordan Alvarez and the Houston Astros are proving to be a worthy opponent.

In what’s been a bit of a pitching duel, the Astros had been trailing the Phillies 1-0 from a 395-foot Kyle Schwarber slam in the top of the sixth inning. This only seemed to wake the Astros out of their nightmare.

Pitcher’s duel gets broken up with one Yordan Alvarez swing

Philadelphia starter Zack Wheeler finally started to come undone in the bottom of the frame, starting by hitting Martin Maldonado with a pitch to put a runner on before Jeremy Pena added a single two batters later. This led to a pitching change, with Jose Alvarado taking the mound for the Phillies.

But the momentum was already on Houston’s side, setting the stage for a 450-foot mammoth home run from Alvarez, who socked 37 dingers during the regular season.

With the home run, the Astros took a 3-1 lead before adding another run before the inning would end.

Needing just one more win to take home the World Series trophy, Alvarez provided the fireworks for what had been a quiet night offensively from Houston’s hitters. Prior to Alvarez’s boomshot, the ‘Stros had just three hits on the day, with two coming from rookie sensation Jeremy Pena.

With the win, the Astros could win their second World Series championship in franchise history, and Alvarez’s performance throughout the year has been a big reason why. He may not win league MVP, but Alvarez has clearly made a case to win series MVP thanks to a clutch performance in front of the home crowd.