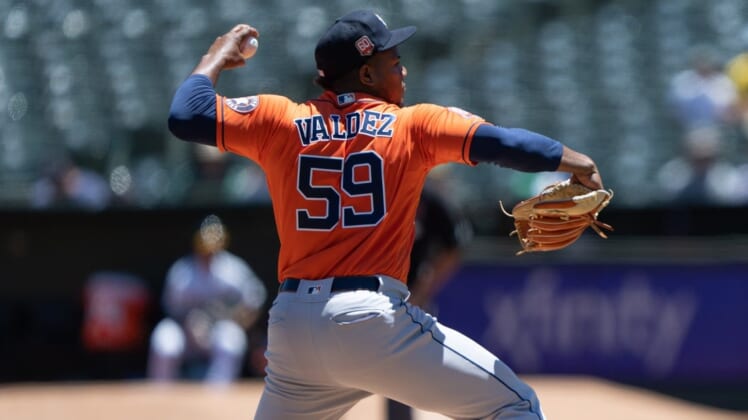 Yordan Alvarez hit two solo home runs, Jose Altuve added a two-run blast, and Framber Valdez allowed a run and two hits in a complete game as the visiting Houston Astros rolled to a 5-1 win over the Oakland Athletics on Monday.

A day after Luis Garcia did not allow a runner against Seattle until the fifth inning, Valdez held the Athletics without a hit until the sixth, when he surrendered a leadoff double to Kevin Smith.

Valdez (5-2) struck out seven and walked three, throwing a career-high 114 pitches in the Astros’ first complete game of the season and the first for the team since Zack Greinke produced one on June 4, 2021, against Toronto.

Valdez’s complete game was only the seventh in the major leagues this season.

Alvarez put the Astros on top in the fourth inning via a titanic solo home run to the second deck in right-center field off Oakland starter Paul Blackburn.

Blackburn (5-1) dropped his first decision of the season after allowing four runs on five hits with five strikeouts and no walks in 6 2/3 innings.

Houston added to its lead in the fifth. Jose Siri was hit by a pitch, stole second and scored on Martin Maldonado’s RBI single. Altuve then ripped a home run to right-center field, handing the Astros a 4-0 advantage.

Ramon Laureano singled home pinch-runner Seth Brown in the sixth to cut the Athletics’ deficit to 4-1.

Alvarez’s second homer, his 14th of the season, came in the eighth off Oakland reliever A.J. Puk.

Houston managed only six hits in the win, two each by Alvarez and Altuve.

Game 2 of the three-game series will be Tuesday night.