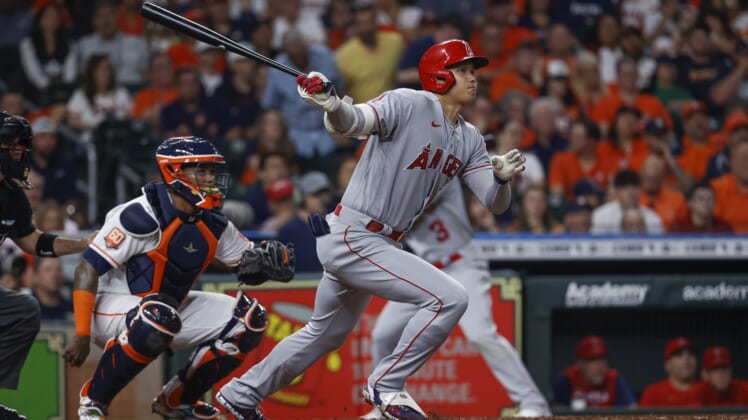 Yordan Alvarez slugged a pair of two-run home runs in his return to the lineup as the Houston Astros claimed their home opener with an 8-3 victory over the Los Angeles Angels on Monday.

Alvarez, sidelined five games due to health and safety protocol, bashed a two-out homer into the upper deck in right field off Angels right-hander Michael Lorenzen (1-1) in the first inning and later followed a leadoff double by Alex Bregman in the seventh with a blast into the home bullpen in right-center. It marked his ninth career multi-homer game and first since Sept. 13, 2021, at Texas. The homers covered 415 and 429 feet. Alvarez finished 3-for-5 with four RBIs.

Sandwiched between the Alvarez seismic blasts were a trio of manufactured runs by the Astros.

Jeremy Pena and Jose Siri reached in succession with the bases loaded and without the benefit of a hit as Pena worked a one-out walk off Lorenzen that snapped a 2-2 tie in the fourth inning. Lorenzen followed by plunking Siri with a pitch to force home Alvarez, who smoked a single to center field after Bregman (2-for-4, two runs scored) opened that frame with a single to right.

Lorenzen departed following the Siri hit by pitch, having allowed four runs on four hits and two walks with two strikeouts over 3 1/3 innings. His walk to Kyle Tucker loaded the bases for Pena.

After Tucker opened the sixth with a single off Angels reliever Austin Warren, Pena reached on a bunt single before Tucker took third on a Siri fly out to right. Nine-hole hitter Martin Maldonado then delivered a perfect sacrifice bunt down the first-base line that scored Tucker for a 5-3 lead.

Alvarez clubbed his third home run of the season off Archie Bradley, the Angels’ fourth pitcher of the night. The Angels had won five of six games.

Astros right-hander Luis Garcia (1-0) struck out the side in the first but allowed a pair of doubles in the second, including one to Tyler Wade that scored Brandon Marsh and Jack Mayfield with two outs. Max Stassi chased Garcia with a two-out homer off the right-field foul pole in the sixth.

Garcia allowed three runs on four hits and one walk with seven strikeouts over 5 2/3 innings.

Astros second baseman Jose Altuve departed with an injury in the eighth following his infield single.