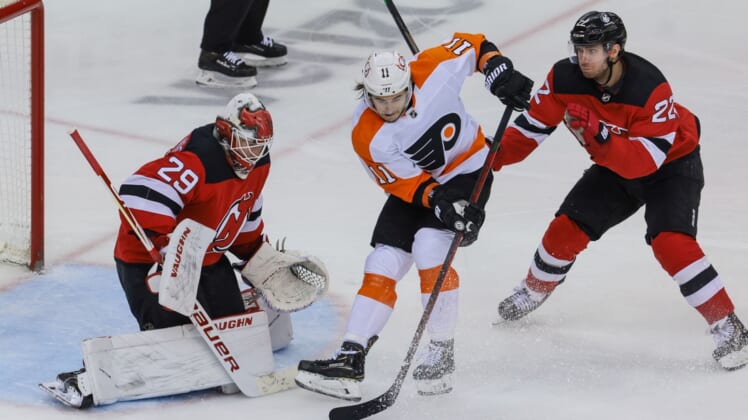 Pavel Zacha had one goal and one assist, while Jesper Bratt and Jesper Boqvist added a goal apiece for the Devils, who won their second in a row following a 10-game losing streak.

Damon Severson and Will Butcher contributed two assists apiece for the Devils (16-27-7, 39 points).

Scott Laughton, Travis Konecny and Sean Couturier scored one goal each for the Flyers (22-21-7, 51 points), who were mathematically eliminated from the playoffs. Jake Voracek added two assists.

Flyers goaltender Alex Lyon received the start instead of Brian Elliott. Carter Hart will miss the remainder of the regular season with an MCL sprain in his left knee. Lyon stopped 14 shots.

The Devils, who scored two power play goals in Tuesday’s 6-4 win between these teams, added two more by Sharangovich in the first period. He connected at 8:10 and then again at 15:28 for a 2-0 advantage and his first career multi-goal game.

The Flyers struggled by taking three penalties along with a number of costly turnovers in their own zone throughout the first.

Laughton scored short-handed at 7:14 of the second to close the Flyers within 2-1. It was the Flyers’ first short-handed goal this season, and it ended Laughton’s 25-game goal drought.

New Jersey responded at 9:00 to go back ahead 3-1 when Boqvist’s slap shot beat Lyon over the blocker.

But the Flyers didn’t wilt as Couturier scored at 12:17 of the second to cut the deficit to 3-2. It was Couturier’s 15th goal of the season.

Midway through the third, the Flyers were the more aggressive team, but they were unable to equalize despite several solid scoring chances.

Seconds after a shot by Claude Giroux was saved, Zacha skated in and gave the Devils a 4-2 advantage at 13:15.

Lyon was pulled for an extra skater with 4:24 remaining, and the Devils took seconds later when Bratt scored into an empty net.

Konecny scored at 18:10 to pull the Flyers within two goals.