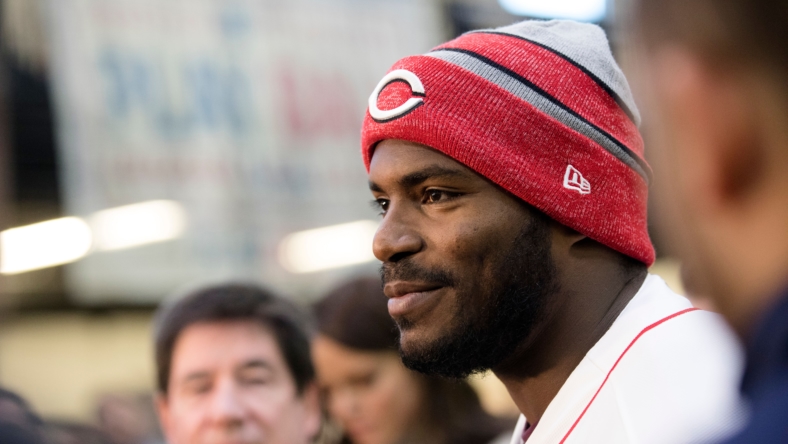 It was less than a decade ago that Cuban sensation Yasiel Puig made his way to the states and was considered one of the most-promising young stars in baseball.

It is both sad and eye-opening how things have turned around for the former MLB All-Star in the nine years since. The outfielder has not suited up in a MLB game since the 2019 season and is currently playing for the Kiwoom Heroes of the KBO League in Korea.

He’s now also in deep trouble domestically. The former star pleaded guilty on Monday to one felony charge of lying to the FBI about an illegal gambling operation. The Department of Justice made the announcement with the following press release.

“A former Major League Baseball (MLB) player has agreed to plead guilty to a federal charge for lying to federal law enforcement officials about bets on sporting events that he placed with an illegal gambling operation, according to court documents unsealed today.

Yasiel Puig Valdés, 31, who currently plays professional baseball in South Korea, has agreed to plead guilty to one count of making false statements, a crime that carries a statutory maximum sentence of five years in federal prison.”

Per the announcement, Puig will make his first appearance in United States District Court on Tuesday. The release states that Puig placed 899 sports bets over a mere three-month span back in 2019. He then apparently lied to federal agents about the operation.

“Lying to federal agents is a serious offense,” said HSI Los Angeles Acting Special Agent in Charge Eddy Wang. “HSI Los Angeles and our partners will actively pursue those that seek to hinder the fair administration of justice.”

Yasiel Puig’s MLB career now all but over

Betting on sporting events while being active in the professional sports world is obviously frowned upon in a big way. Having not seen action on a MLB diamond since he was a member of the then-Cleveland Indians back in September of 2019, it’s safe to say that Puig has played his final game in the league. That’s magnified by the fact that this alleged gambling took place while he was an active MLB player.

It’s a darn shame. Puig, 31, made his MLB debut with the Los Angeles Dodgers back in 2013 to much fanfare. He finished his rookie season as the runner-up for the NL Rookie of the Year award, hitting .319 with 19 homers and 42 RBI in 104 games.

Puig then started to be seen as somewhat of a malcontent with the Dodgers. He would play with the team through the 2018 season, but never really came close to living up to expectations. Puig’s best season came back in 2017 when he hit 28 homers and drove in 74 runs for a Dodgers team that ultimately lost to the Houston Astros in the World Series.

Puig would ultimately split time with Cincinnati and Cleveland in 2019 before finding himself out of the game altogether. He had signed a deal with the Atlanta Braves back in 2020, but it was nixed after Puig tested positive for COVID-19.

As for this guilty plea, we’ll have to wait and see how much time (if any) Yasiel Puig receives in prison. But it’s certainly not a good look for the former MLB All-Star.