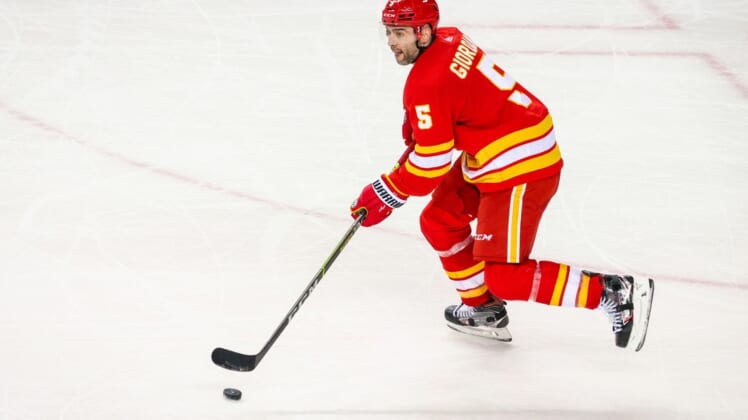 May 5, 2021; Calgary, Alberta, CAN; Calgary Flames defenseman Mark Giordano (5) skates with the puck against the Winnipeg Jets during the third period at Scotiabank Saddledome. Mandatory Credit: Sergei Belski-USA TODAY Sports

Now, the Seattle Kraken can get crackin’.

The National Hockey League’s 32nd and newest franchise stocked its roster Wednesday in the expansion draft, with their selections announced at a nationally televised party at Seattle’s Gas Works Park featuring Grammy Award-winning Macklemore and several of the city’s current and former sports heroes.

“I think anytime you see a name like Carey Price available, you have to consider it,” Francis said. “Certainly we did that. We had a lot of discussions, and at the end of the day we made the decision that we did to go in a different direction.”

The Kraken did take three players scheduled to make more than $5 million next season.

“This is the first time in my career I’ve ever been drafted,” Giordano said, who entered the league as an undrafted free agent. “It’s a beautiful city and you can feel the buzz.”

“It’s a new challenge. You don’t get many opportunities to be part of a new franchise,” said Eberle, who modeled the Kraken’s road jersey.

Goaltender Chris Driedger, an unrestricted free agent, signed a three-year deal with the Kraken reportedly worth a $3.5 million average annual value, making him Seattle’s selection from the Florida Panthers.

“This is a life-changing moment for me, for sure,” said Driedger, wearing a Seattle home jersey.

The Kraken also chose a pair of veteran defensemen who were pending unrestricted free agents and signed them to new deals: Jamie Oleksiak of the Dallas Stars and Adam Larsson of the Edmonton Oilers.

Seattle followed the blueprint provided by the 2017 expansion Vegas Golden Knights in one way. The Golden Knights selected goalie Marc-Andre Fleury, who ended up leading them to the Stanley Cup Final in their first season.

While the Kraken didn’t pick Price, who was seen as the 2021 comparable to Fleury, they selected two defenseman named Fleury: brothers Haydn Fleury from the Anaheim Ducks and Cale Fleury from the Montreal Canadiens, who aren’t related to Marc-Andre Fleury.

Kraken fans showed their knowledge of the NHL by booing commissioner Gary Bettman when he took the stage.

“Yes, with the booing and all these people — you are ready for NHL hockey,” Bettman said.

On the broadcast, it was revealed that the Kraken’s home opener at the newly renovated Climate Pledge Arena will be Oct. 23 against the Vancouver Canucks, with whom the NHL wants Seattle to establish a geographic rivalry.

The Kraken then had to choose one player from every other NHL team except the Golden Knights, because they were an expansion team four years ago. Of the 30 picks, Seattle was required to select at least 14 forwards, nine defensemen and three goaltenders.

The Kraken ended up with 14 forwards, 13 blueliners and three goalies.