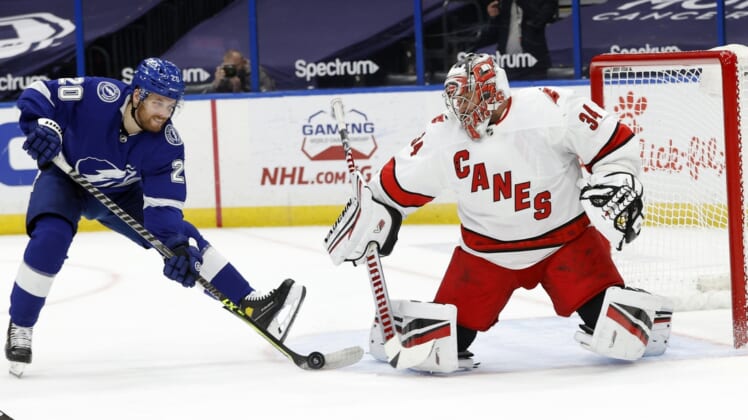 Tampa Bay’s Yanni Gourde put in his own rebound 2:50 into overtime in the Lightning’s 3-2 win over the visiting Carolina Hurricanes on Monday night.

Gourde took a pass from Alex Killorn and put an open shot from the slot that Carolina goalie Petr Mrazek saved, but the puck stayed in the blue paint.

The center then won it by collecting the puck and pushing in his fifth career overtime winner and first this season after the Lightning wasted a 2-0 lead.

Killorn had a goal, and Brayden Point found the net for Tampa Bay, which moved to 4-2-1 against the Hurricanes.

Andrei Vasilevskiy (27-7-1) stopped 25 of 27 shots, including a point-blank chance by Jordan Staal 18 seconds into overtime for his NHL-best win total.

The two teams will play the second of their back-to-back set Tuesday.

Carolina put forth great pressure on its first power play after Tampa Bay defenseman Erik Cernak went off for roughing Carolina center Sebastian Aho at 10:06 of the first.

However, the Lightning killed the man advantage, and their second line of Killorn, Tyler Johnson and Anthony Cirelli came through for them.

Mired in a four-game pointless streak, Johnson grabbed a puck from Cirelli near the neutral zone boards and found Killorn streaking near the blue line.

The left winger raced in one-on-one against Mrazek, showed forehand and flipped in a backhander at 14:42 for his 12th tally.

The goal was just Killorn’s second in his last 12 games and only his fourth point in that span.

Early in the second, Tampa Bay took a two-goal advantage at 2:08 on its first power play after Carolina’s Vincent Trocheck held Cirelli.

Parked in front of Mrazek, Point used a clever redirection of Ondrej Palat’s shot 42 seconds into the man advantage to make it a 2-0 game.

But nearly eight minutes later and with Cernak off a second time for interference on Jesper Fast, Svechnikov ripped his 13th goal from the left circle just 10 seconds into Carolina’s second power play to cut the disadvantage to 2-1.

Just 68 seconds into the third, Skjei secured a loose puck off the boards in the offensive end and buried his second goal of the season from the left circle to bring the Hurricanes back to a 2-2 tie.