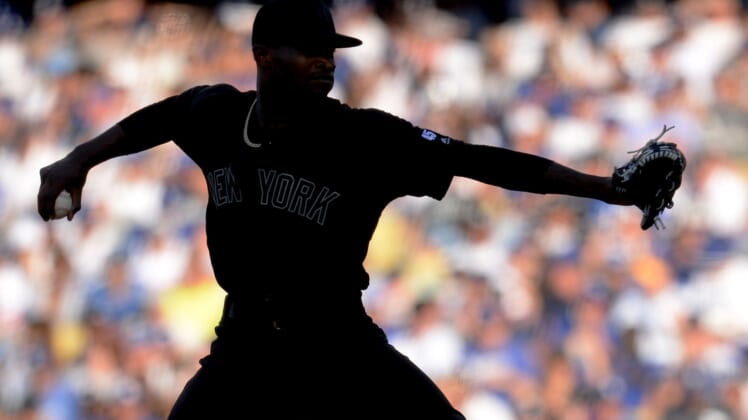 Zack Britton was asked via Zoom on Thursday whether German could be welcomed back to the clubhouse following a suspension for domestic violence.

“That’s a tough question,” Britton said on camera from Tampa as the Yankees open spring training. “I don’t think he owes anything to me. I think it’s off the field stuff that he needs to take care of. Sometimes you don’t get to control who your teammates are … that’s the situation. I don’t agree with what he did. I don’t think it has any place in the game or off the field at all.”

“My job is to go out there and pitch and do my job. So that’s kind of what my concern is right there. But (German) doesn’t owe me anything. I think that’s something that he’s going to have to deal with on his own and make better choices going forward.”

German posted an 18-4 record in 2019 before he was placed on administrative leave.

While manager Aaron Boone said Wednesday that the Yankees have promised German “nothing,” the 28-year-old right-hander posted a comment via Twitter indicating “everything is over.” The Yankees quickly huddled to discuss the connotations with Boone, who admitted Thursday he was surprised by the message and its implication that the franchise had forgiven past ills.

“Feel like when I first heard about it last night and saw it, it was brought to my attention, I was taken aback a little bit and immediately concerned,” Boone said. “But I do feel like — maybe a little bit out of context. A little bit overblown. And I am confident that he’s doing fine and doing well and ready to compete.

“But it is something we’ll continue to watch and as best we can try and make sure he’s in a good place. But I had the conversation about trying to be as smart and choosy as we can be about some of the things we’re expressing publicly.”

The suspension came as a result of an incident between German and his girlfriend, with whom he has at least one child, at his residence in Yonkers, N.Y. German agreed not to appeal the suspension and made a donation to Sanctuary for Families.