Yankees win 9th in a row with victory over Blue Jays 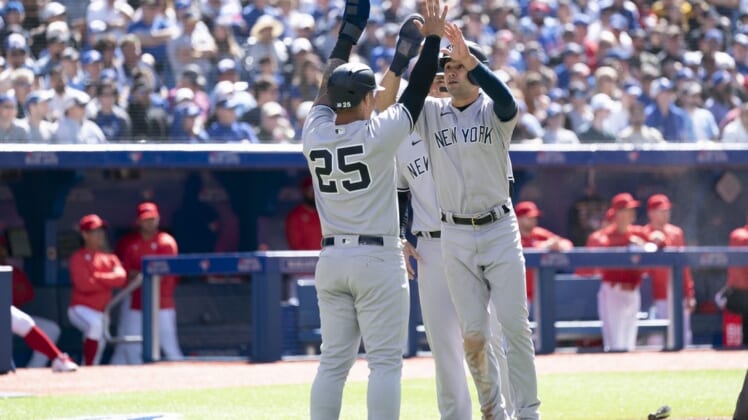 The Yankees have won the first two games of the three-game series to extend their winning streak to nine games. The Blue Jays have lost three in a row.

The Yankees scored three runs in the fourth inning.

Anthony Rizzo walked with one out and Gleyber Torres singled. Isiah Kiner-Falefa beat out an infield single to shortstop to load the bases. Aaron Hicks cleared the bases with a double to right.

When Jose Trevino was hit by a pitch on what was ruled a checked swing, Toronto manager Charlie Montoyo was ejected for arguing that it had been a swing.

Taillon pitched around a leadoff double in the bottom of the fifth with three strikeouts.

Torres led off the sixth with a double to left. Raimel Tapia had the ball in his glove before it bounced out and hit the wall. The Yankees won a challenge to overturn the initial call of a catch. Kiner-Falefa then stroked an RBI double with one out to score Torres.

George Springer walked and Bo Bichette singled to open the bottom of the sixth. Springer took third when Alejandro Kirk flied out to center for the second out. Michael King replaced Taillon and struck out Teoscar Hernandez.

King pitched around Matt Chapman’s single to keep the seventh inning scoreless for the Blue Jays.

Toronto’s Trent Thornton allowed only Hicks’ infield single in the top of the eighth and a walk in the ninth.

King walked Springer to lead off the bottom of the eighth. He struck out Bichette and Vladimir Guerrero Jr. before Clay Holmes replaced him to finish the inning.

Holmes pitched a perfect bottom of the ninth with one strikeout.