Yankees use pair of longballs to overcome Rays, 4-3 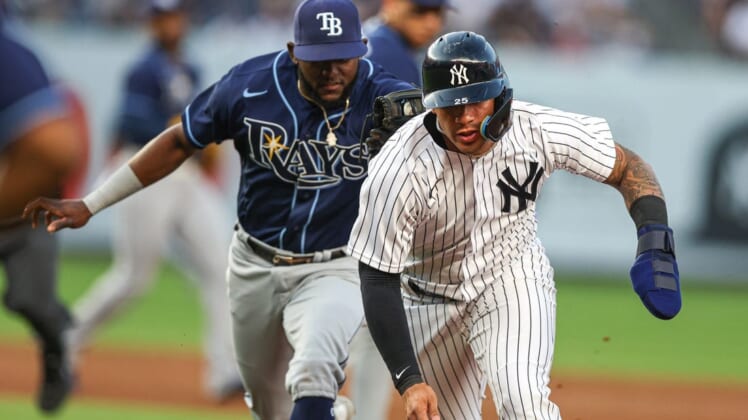 Kyle Higashioka hit a three-run homer to help the New York Yankees to a 4-3 win against the visiting Tampa Bay Rays in the second game of their three-game series on Wednesday night.

Yankees left-hander Nestor Cortes (6-2) gave up one run and three hits in 5 1/3 innings, striking out four and walking three. He has allowed three runs or fewer in 20 of his past 21 starts.

Rays left-hander Shane McClanahan (7-3) came in leading the MLB with 98 strikeouts, tied for fourth in wins, and fifth in ERA (1.87), but the Yankees scored three unearned runs off him in the fourth to halt his five-game winning streak.

Judge gave the Yankees a 1-0 lead in the first inning with his MLB-leading 25th home run of the season.

Josh Donaldson began the fifth inning for the Yankees by hitting a fly ball to right-center field that was dropped by center fielder Brett Phillips for a two-base error.

Up stepped Higashioka, the No. 9 hitter with two home runs in his previous 105 plate appearances this season, and he pulled a three-run homer down the left-field line for a 4-0 lead.

Tampa Bay made two errors in the outfield in the series opener on Tuesday night that led to both unearned runs in the 2-0 loss.

Yandy Díaz and Manuel Margot doubled off Cortes in the sixth to drive in the first run of the series for the Rays and make it 4-1.

After a 15-minute delay while the umpires discussed the legality of a pitching change by the Yankees in the eighth inning, Ji-Man Choi and Rene Pinto came through with back-to-back RBI singles to cut the lead to 4-3.

Clay Holmes pitched the ninth to earn a save for the second consecutive night and 11th time this season. He has not allowed a run in 30 straight innings.