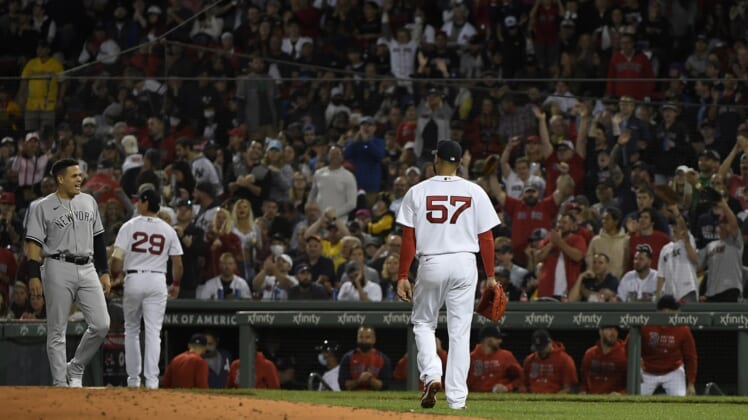 Aaron Judge hit a go-ahead two-run double in the eighth inning as the New York Yankees completed a three-game sweep of the host Boston Red Sox with a 6-3 win Sunday that broke a tie for the top American League wild-card spot.

Judge was given new life after foul-tipping a 1-2 fastball from Boston reliever Adam Ottavino that Red Sox catcher Christian Vazquez dropped. Judge smoked the very next pitch from Ottavino to plate runners from second and third with one out.

Giancarlo Stanton (2 for 4) added a two-run homer over the Green Monster the next at-bat — his third in as many games in the series. DJ LeMahieu (2 for 4) had a fifth-inning RBI single for the Yankees, who won nine of their final 12 games against Boston after dropping their first seven meetings.

New York (89-67) moved one game ahead of Boston (88-68) atop the AL wild-card standings with six games remaining for both teams. The Red Sox hold a one-game lead over Toronto (87-69) for the final AL playoff spot.

Boston had taken a 3-2 lead when Yankees left fielder Joey Gallo dropped a fly ball hit by Boston pinch hitter Kyle Schwarber with a runner on second and two outs in the seventh.

J.D. Martinez put Boston up 1-0 with a sacrifice fly in the fourth. Gio Urshela plated the tying run for the Yankees on a groundout in the fifth before LeMahieu’s go-ahead single. Christian Vazquez re-tied it for Boston with a sac fly in the seventh.

Yankees reliever Chad Green (10-7) earned the win after tossing 1 2/3 scoreless innings. Red Sox reliever Garrett Richards (7-8) took the loss after being charged with two of the four Yankee runs in the eighth.