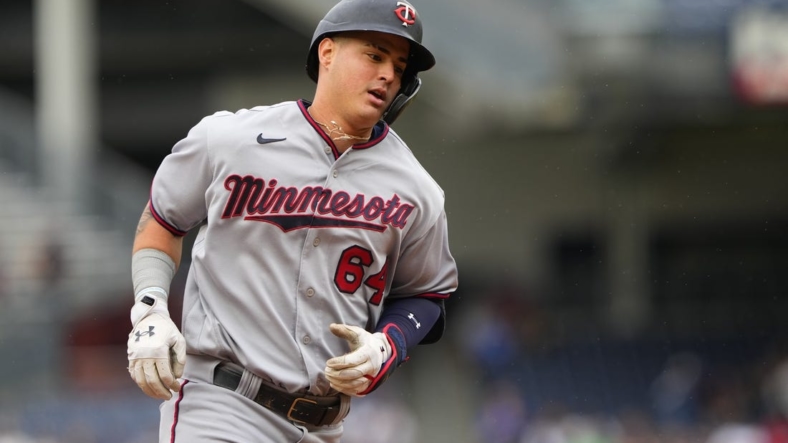 Isiah Kiner-Falefa hit a game-tying single to open the 12th inning and Oswaldo Cabrera ended an 0-for-25 skid with a game-ending single four batters later as the New York Yankees rallied for a 5-4 victory over the visiting Minnesota Twins on Wednesday in the opener of a doubleheader.

The Yankees were unable to score in the 10th and 11th as Cabrera and Ronald Guzman hit into double plays. New York fell behind when Gilberto Celestino hit an RBI double in the top of the 12th against Ron Marinaccio.

New York quickly tied it when Kiner-Falefa slapped an RBI single up the middle three pitches into the 12th against Trevor Megill (3-3). After Estevan Florial struck out, Kiner-Falefa stole second on the first pitch to Jose Trevino, who followed with a single.

After Oswald Peraza flied out, Cabrera won the game by slapping a 1-2 pitch into left field and was mobbed by his teammates at first base.

The Yankees (82-54) won their third straight and also clinched their 30th straight winning season by pulling off their 14th walk-off win victory. Prior to the contest, New York put Anthony Rizzo (headaches) on the injured list and Josh Donaldson on the paternity list, and DJ LeMahieu (toe) and Giancarlo Stanton (foot) sat out.

Aaron Judge homered for the fourth straight game, hitting a solo shot in the fourth for his 55th of the year. He is six shy of the American League record set by Roger Maris with the Yankees in 1961.

Twins starter Louie Varland allowed two runs on three hits in 5 1/3 innings during his major league debut. With about 20 friends and family cheering him on from the third base side of the second deck, Varland struck out seven, walked one and threw 80 pitches.

German gave up three runs on seven hits in six innings. He struck out six and walked one.

Aided by Cabrera’s outfield assist in the 10th, Yankees reliever Clay Holmes pitched two scoreless innings. Greg Weissert (3-0) got two outs in the top of the 12th, keeping the Yankees’ deficit at 4-3 to set up for the key hits from Kiner-Falefa and Cabrera.