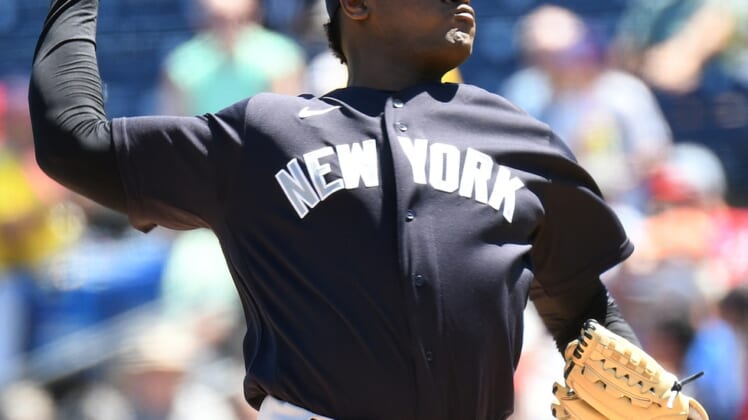 Severino is penciled in as the team’s No. 2 starter, after Gerrit Cole.

Boone said Severino reported he was sore after he faced the Philadelphia Phillies last Friday in a spring training game in Clearwater, Fla. Instead of facing the Toronto Blue Jays on Wednesday, he likely will throw in the bullpen and start Saturday against the Atlanta Braves in Tampa.

It’s no surprise the Yankees are being cautious with Severino, who missed all of the 2020 season and most of 2021 recovering from Tommy John surgery. He returned to pitch last Sept. 21 for his first appearance since Game 3 of the 2019 American League Championship Series, and in six innings of relief spread over four games, he was 1-0 with a 0.00 ERA. He gave up just two hits and struck out eight.

Boone didn’t specify whether the soreness stemmed from Severino’s elbow or a past shoulder issue.

“We feel like it is general and us being cautious, but anytime I say that about a pitcher — especially of his stature and what he’s been through — it gives you a little bit of concern,” Boone said.

But the 28-year-old has been anything but sharp this spring. In 3 2/3 innings over two starts, he’s given up seven earned runs on eight hits and five walks, striking out one.

The Yankees are scheduled to open the season at home against the Boston Red Sox on April 7.