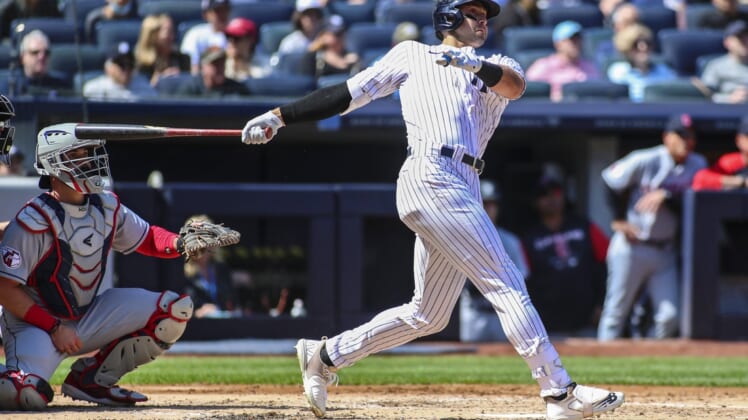 Gerrit Cole pitched 6 2/3 stellar innings, DJ LeMahieu fell a triple shy of the cycle and the New York Yankees rolled to a 10-2 victory over the visiting Cleveland Guardians Sunday afternoon to complete their first series sweep of the season.

Coming of a career-low 1 2/3 innings Tuesday in Detroit, Cole (1-0) allowed four hits and turned in his first scoreless outing since Aug. 27 at Oakland. Cole struck out nine and walked one in a 92-pitch outing as his 47 four-seam fastballs averaged 97.2 mph.

Cole produced New York’s longest outing by a starter this year, did not allow a runner to reach scoring position and lowered his ERA from 6.35 to 4.00.

LeMahieu extended his hitting streak to 11 games. He hit an RBI double in the second inning and then added a two-run homer in the sixth.

Aaron Hicks and Isiah Kiner-Falefa also drove in runs as the Yankees scored double-digit runs for the first time since Aug. 20 and won for the fifth time in six games.

Andres Gimenez hit a two-run triple in the ninth for Cleveland, which saw Jose Ramirez go 1-for-11 in the series, dropping his average from .426 to .362.

The Guardians also lost rookie left fielder Steven Kwan to right hamstring tightness, a day after he crashed into the fence in the ninth inning.

The Yankees opened a 2-0 lead in the first inning when Rizzo lined a 1-2 curveball over the short porch in right field for his fifth homer.

LeMahieu made it 3-0 when he ripped a double over right fielder Oscar Mercado’s glove in the second and the Yankees added three in the third.

The Yankees had the bases loaded when Hicks hit a pop-up that fell in front of center fielder Myles Straw and scored Rizzo. Gallo followed with a double to right and Hicks scored on Kiner-Falefa’s fly ball to left.

LeMahieu made it 8-0 when he blasted a fastball from rookie Kirk McCarty into the left-field seats for his second homer of the season.