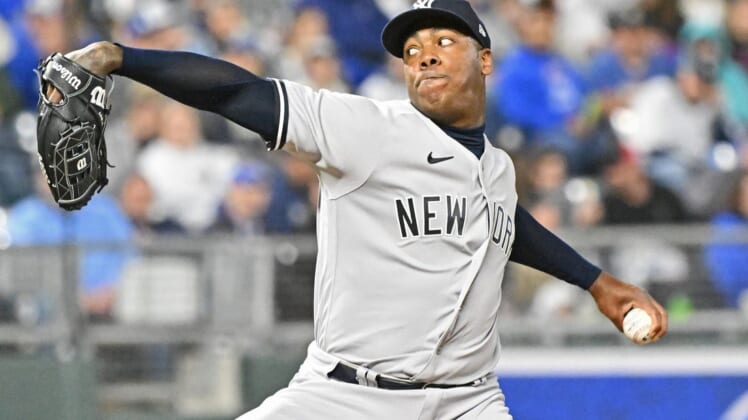 New York Yankees reliever Aroldis Chapman has been cleared for a rehab assignment and will join Double-A Somerset on Friday.

The left-hander was placed on the 15-day injured list on May 24 with tendinitis in his left Achilles. He’s 0-2 so far this season with nine saves in 17 appearances and a 3.86 ERA in 14 innings of work.

A seven-time All-Star, Chapman has racked up 315 saves and more than 1,000 strikeouts in his 13-year MLB career.

When he’s ready to return, it’s unclear whether Chapman will step back into the closer’s role. In his absence, the Yankees (52-18) have been on cruise control with Clay Holmes serving as closer. In his past 11 appearances, he has converted eight of his nine save chances with a 0.82 ERA in 11 innings pitched.

“I am here, trying to recover, come back, be well, healthy, and help the team in any way, in any role,” Chapman said through an interpreter on Tuesday. “(Holmes) is doing an excellent job right now and I think he deserves the role that he has.”

He continued: “I’m past that point in my career in which I would fight for a role, for the closer role.”