Yankees on roll heading into series finale vs. Orioles 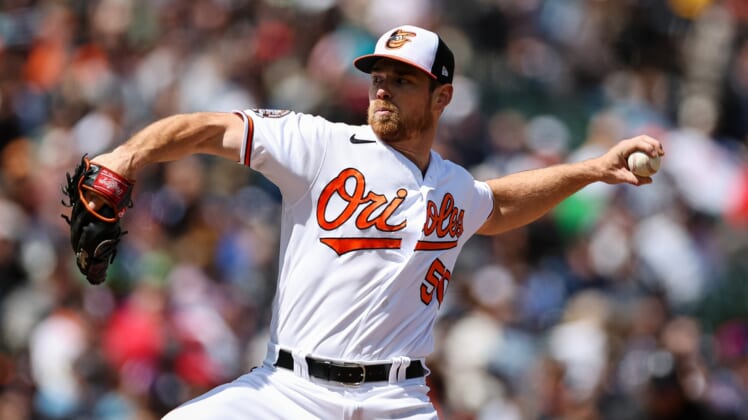 For the first two weeks of the season, the New York Yankees were barely scoring runs but getting enough pitching to eke out wins.

Now they are getting a decent amount of both components and are on a five-game winning streak heading into the finale of a three-game series with the visiting Baltimore Orioles on Thursday afternoon.

The Yankees kept their streak going on Wednesday with a 5-2 win. Giancarlo Stanton hit his 350th career homer after going 14 games without a homer, and Joey Gallo homered for the second straight game.

“It’s a really focused group that has a lot to prove,” Yankees manager Aaron Boone said of his team winning 12 of the first 18 games. “I feel like our focus is in all the right places — getting ready to play a game each and every night. And I feel like we’re doing that in a lot of aspects, whether it’s the pitching, the defense, the baserunning, offensively. It’s good to see we’re getting results.”

Stanton added, “We’ve got a good thing going here. We just have to keep working and pushing.”

The Orioles have yet to lead in the series, though they have shown some perkiness. They nearly erased a pair of six-run deficits Tuesday after getting no-hit into the sixth, and they tied the Wednesday game in the sixth before falling to 4-17 in their past 21 visits to New York.

The Orioles enter the finale with nine homers on the season, six of them in the past three games. On Wednesday, Anthony Santander homered for the second straight game and reached base for the 19th straight game dating to last season.

“I’ve always seen that player in him,” Baltimore center fielder Cedric Mullins said of Santander. “It was just a matter of it coming out. He’s feeling really good out there.”

Jameson Taillon (1-1, 3.07 ERA), who has allowed two runs or fewer in each start so far, goes for the Yankees on Thursday. Taillon last pitched in a 4-1 win over the Cleveland Guardians on Friday, when he allowed one run on seven hits in five innings while throwing a season-high 84 pitches.

Taillon does not have a decision and owns a 3.45 ERA in three career starts against the Orioles. In his last outing against them, he allowed two runs on three hits in 4 2/3 innings in New York’s 5-2 win in Baltimore on April 16.

Bruce Zimmermann (1-0, 1.20 ERA), who blanked the Yankees in five innings of four-hit ball on April 17 in Baltimore, goes for the Orioles, whose pitching staff has allowed 14 homers in the past six games.

Zimmermann picked up a win on Friday, when he allowed three runs (two earned) on five hits in six innings of a 5-3 victory over the Los Angeles Angels.

Zimmermann is 1-1 with a 3.14 ERA in three career appearances (two starts) against the Yankees.