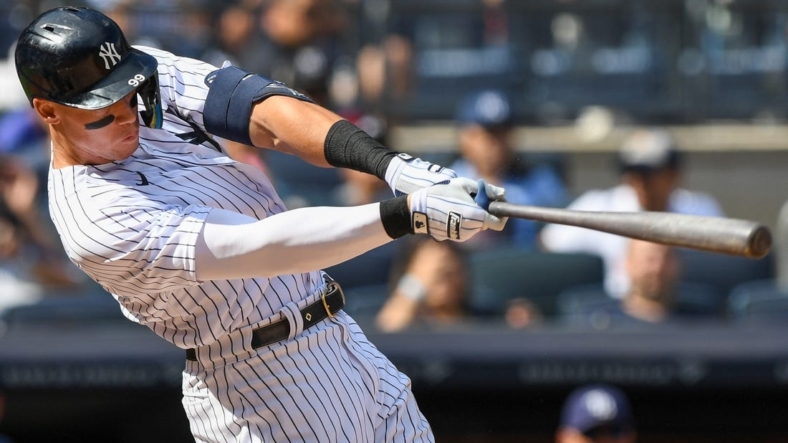 Though Aaron Judge has gone homerless in four straight games, the slugger is still on an impressive run of getting on base.

Judge has reached base at least three times in seven straight games and will attempt to continue his string Sunday when the Yankees host the Tampa Bay Rays in the rubber game of their three-game weekend series and their final game in the season series.

Judge collected two of his three singles during a six-run opening inning off Corey Kluber on Saturday, when the Yankees rolled to a 10-3 victory. It was the Yankees’ fifth win in their past seven games and 10th victory in 18 meetings against the Rays this season.

If he reaches base at least three times Sunday, Judge will become the first Yankee to do so since Lou Gehrig did it nine straight times in 1937.

On Saturday, two came back as Josh Donaldson homered in his return from the paternity list and Giancarlo Stanton connected after being limited to a pair of pinch-hitting appearances since injuring fouling a ball off his foot Monday.

“Every game is big; let’s not short that,” Donaldson said. “Obviously, the Rays are the club that’s on our heels. We can’t control what’s happened in the past. We’re playing for today, and after today’s over we’re going to turn the page.”

Tampa Bay is looking to rebound from a rare loss after Kluber got six outs and was tagged for six runs on eight hits. The Rays are 9-2 in their past 11 games and 24-11 in their past 35 after their pitching staff allowed 15 hits Saturday.

“I think we’ve done a pretty good job of responding to adversity, whether it be a poor game like today, injuries and any of that sort of stuff,” Kluber said.

New York’s Domingo German (2-3, 3.27 ERA) is expected to make his 11th start of the season and will pitch on short rest after allowing three runs on seven hits in six innings of the first game of Wednesday’s doubleheader against Minnesota.

Tampa Bay righty Luis Patino (1-1, 4.34) is expected to make his sixth start since returning from an oblique strain. Patino threw 91 pitches and allowed three runs in five innings against Boston on Monday.

Patino is 2-1 with an 0.75 ERA in three career appearances (two starts) against the Yankees.