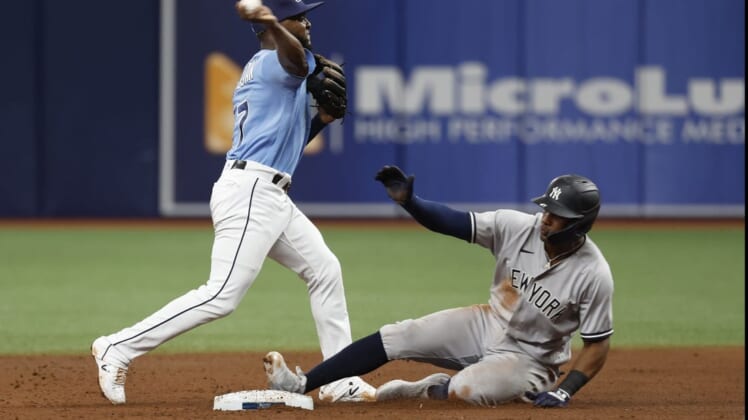 The Tampa Bay Rays enter their three-game series at the New York Yankees on Tuesday night feeling a little more optimistic about their situation.

The Rays have not been swept in a series in more than a year and barely avoided that fate by defeating the Minnesota Twins 6-0 on Sunday.

“Heading into the off-day, going into an early big series against New York, ideally you come off feeling a little bit better about yourself,” Rays manager Kevin Cash said. “We hadn’t the last couple days.”

The Yankees enter the series with the best record in baseball (44-16) and winners of 11 of their past 12 games.

They dismantled the Chicago Cubs 18-4 on Sunday, a day after beating them 8-0, to complete a three-game sweep of their own.

New York’s powerful offense has been supplemented lately by veteran Matt Carpenter, who was in the minors with the Texas Rangers in late May when he asked for his release and was snatched up by the Yankees.

Carpenter wasn’t expected to be in the starting lineup on Sunday, but Gleyber Torres felt ill before the game and Carpenter was penciled in at designated hitter. He went 3-for-4 with two home runs, a double and seven RBIs.

Carpenter has six home runs in 10 games since signing with the Yankees.

“I’ve played the game long enough to know what it feels like and looks like when I’m right,” Carpenter said. “This is certainly that.”

Carpenter was a three-time NL All Star with the St. Louis Cardinals, but his batting average finished below .200 in both 2020 and 2021.

“It kind of got away from me the last few years. I just didn’t really have it,” he said. “I was able to put in a lot of good work and have a lot of people help me get it back, so it’s pretty rewarding. To be able to do it in New York City for the best team in baseball, and them having the faith to sign me, it means a lot. I’m enjoying it.”

The Yankees are scheduled to send right-hander Gerrit Cole to the mound for the series opener.

Cole (5-1, 3.63 ERA) will be looking for a better start after he became the first Yankees pitcher to allow home runs to the first three batters of a game in team history. That happened against the Twins on Thursday, a game the Yankees eventually came back to win 10-7.

The four-time All Star will be up against fellow right-hander Corey Kluber, who is looking to improve his record to 3-0 in June.

The two-time AL Cy Young winner is 5-2 in nine career starts against New York with a 2.42 ERA.