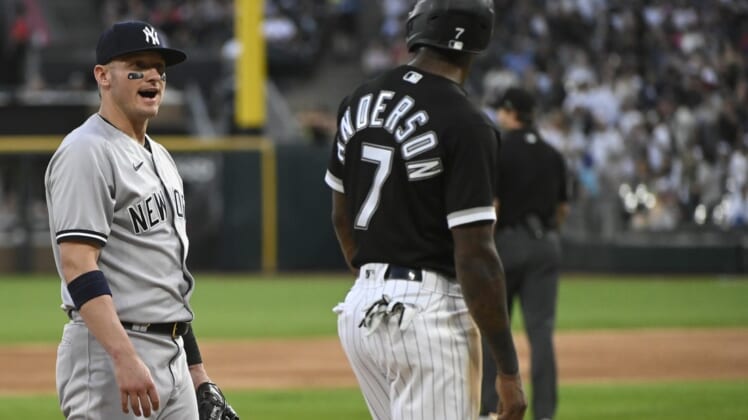 Donaldson is appealing the punishment. He was also placed on the COVID-19 injured list earlier in the day and will miss Monday’s home game against the Baltimore Orioles regardless.

“MLB has completed the process of speaking to the individuals involved in this incident,” MLB senior vice president for on-field operations Michael Hill said in a statement. “There is no dispute over what was said on the field. Regardless of Mr. Donaldson’s intent, the comment he directed toward Mr. Anderson was disrespectful and in poor judgment, particularly when viewed in the context of their prior interactions. In addition, Mr. Donaldson’s remark was a contributing factor in a bench-clearing incident between the teams, and warrants discipline.”

Anderson, who is Black, referred to himself as a modern-day Jackie Robinson in a 2019 Sports Illustrated article. Donaldson said after the game that he thought the “Jackie” self-reference had been a joke between them in the past, but Anderson and the White Sox called it out as racist.

Donaldson made the “Jackie” comment in both the first and third innings of Saturday’s game, according to Anderson, with the players arguing with each other in the third inning before they both were escorted off the field. Benches emptied in the fifth inning after White Sox catcher Yasmani Grandal began to have words with Donaldson at the plate.

Donaldson apologized after the game.

“Obviously he deemed that it was disrespectful and, look, if he did, I apologize,” he said in part. “That’s not what I was trying to do by any manner and that’s what happened.”