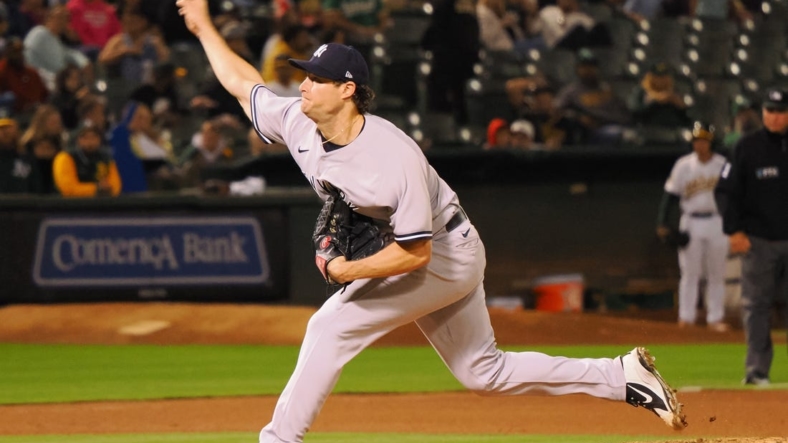 The Los Angeles Angels went the extra mile to try to land star right-hander Gerrit Cole during the free agency period before the 2020 season.

Cole signed with the New York Yankees, however, and the Angels have continued to fall short with him.

Cole will bring a seven-start winning streak against host Los Angeles when he takes the mound on Wednesday night in the rubber game of a three-game series in Anaheim, Calif.

Cole has a 1.83 ERA in his past seven starts against the Angels, a streak that began when Cole was with the Houston Astros in 2018.

Cole has been especially strong at Angel Stadium, which is about five miles from where he dazzled scouts while playing for Orange Lutheran High School. Cole is 3-0 in Anaheim during his streak, with a 1.42 ERA.

In his most recent appearance against Los Angeles nearly a year ago, Cole allowed one run and four hits, struck out 15 and didn’t walk a batter in a Yankees 4-1 win at Angel Stadium.

Yankees outfielder Aaron Judge told reporters after that game how happy he was to have Cole as a teammate.

“I was just sitting out there in the outfield (thinking), ‘Thank goodness he’s wearing his away jersey right now and not a white-and-red jersey,'” Judge said. “He’s that good. He’s a guy that can change a team, change a franchise, and we’re just happy to have him.”

Cole (10-6, 3.31 ERA) has experienced ups and downs this season, but he seems to have found a groove based on his latest outing on Friday at the Oakland Athletics. Cole allowed one run and three hits in 7 1/3 innings of a 3-2 win.

The Angels, meanwhile, have been performing well of late.

Before losing 7-4 to New York on Tuesday night, Los Angeles had won four in a row, its longest winning streak since taking six in a row from April 24-29.

The Angels plan to counter on Wednesday with left-hander Patrick Sandoval, who’s been spectacular in August but has little to show for it.

Sandoval gave up just one earned run in his most recent outing on Thursday, but he took the loss when the Tampa Bay Rays scored four unearned runs in an 8-3 win.

“I’ve got to take some positives away,” Sandoval said. “I felt good. I felt crisp. I made them put some bad swings on some balls.”

Sandoval has never faced the Yankees.

One of the bright spots for the Angels has been first baseman Mike Ford, who was released by the Atlanta Braves on Aug. 10 and was signed by Los Angeles six days later.

Ford has homered in the past two games and has three consecutive multi-hit games.

“I’ve liked the swings,” Angels interim manager Phil Nevin said. “It’s a lot like what he did in ’19, when (both were with the Yankees). He had some big home runs for us. He’s getting a chance to play each day too, which probably helps a guy who hasn’t had that opportunity.”