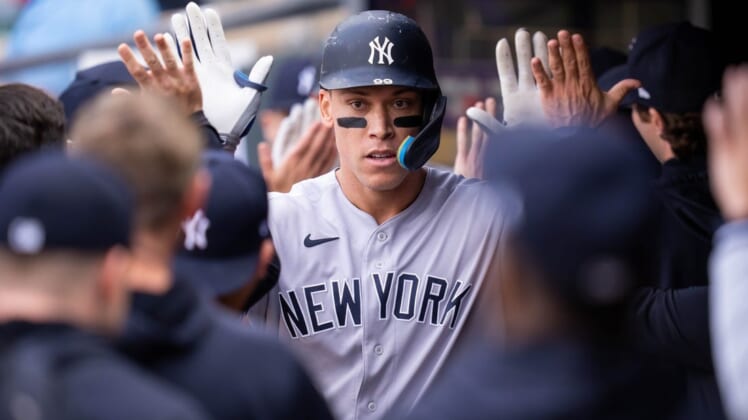 Aaron Judge and the red-hot Yankees will look to thump more opposing pitching when New York faces the Minnesota Twins on Wednesday night in Minneapolis.

New York is coming off its seventh win in a row, 10-4 over Minnesota, in the series opener Tuesday night. Judge, Giancarlo Stanton and Anthony Rizzo hit one home run apiece for the Yankees.

For Judge, it was his 22nd homer of the season, which leads the big leagues. Through the Yankees’ first 55 games, he is on pace to finish with 64 home runs and 132 RBIs.

“I don’t feel like I have to swing for the fences,” Judge said. “I feel like if I get a good swing on it and make contact, it’s in the game. But trying to keep it simple for me this year has really worked out. …

“I try not to think of the power aspect. I just try to make contact. If it goes over the fence, if I’m standing on first base with a single, I’m happy with that, too, just knowing the guy that I’ve got behind me.”

Twins right-hander Chris Archer (0-2, 3.89 ERA) will try to cool down the Yankees’ high-powered offense. Archer is still searching for his first victory of the season as he prepares to make his 11th start.

In his last outing, Archer limited the Detroit Tigers to one run on three hits in five innings Thursday but received a no-decision. He walked one and struck out three.

The once-anonymous southpaw has drawn national attention for his season-long dominance.

Cortes has allowed one run in 15 innings in his past two starts. In his most recent outing, he pitched seven scoreless innings against the Los Angeles Angels on Thursday, allowing five hits, two walks and striking out seven.

The Twins expect to welcome back shortstop Carlos Correa, who has been sidelined because of COVID. Correa took part in a full workout Tuesday and will make sure he is well enough to play on Wednesday.

“I was pretty sick,” Correa said. “I had a massive headache, chills, (sore) throat. I was coughing a lot.”

In his first season in Minnesota after seven seasons with the Houston Astros, Correa is hitting .279 with three homers and 16 RBIs in 35 games.