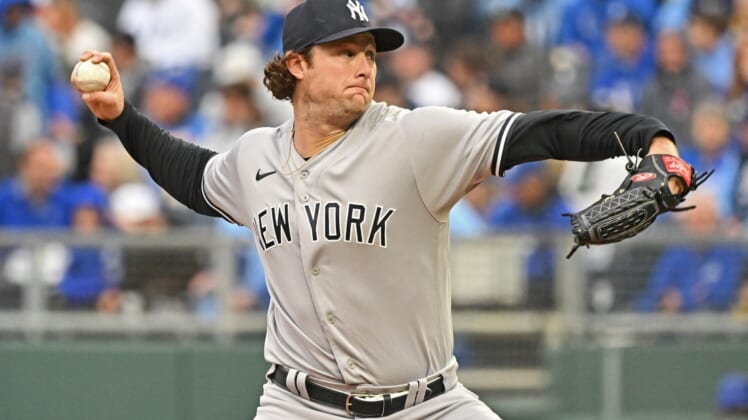 Gerrit Cole did his part to contribute to the New York Yankees’ recent 11-game winning streak and he now gets a chance to start the club on another run of success.

After a pair of stellar performances during the winning streak, that followed three rough performances, Cole will be back on the mound Friday night when the Yankees play host to the Texas Rangers in the opener of a three-game series at Yankee Stadium.

New York will enter off a 2-1 defeat Wednesday at Toronto, its first loss since April 21.

Cole (2-0, 3.00 ERA) tossed 12 2/3 scoreless innings in victories over the Cleveland Guardians and Kansas City Royals last week. He will attempt to pitch three straight scoreless outings for the first time in his career and may be pitching to catcher Jose Trevino for the third straight time after throwing to Kyle Higashioka for all but two starts going back to the start of 2021.

“He was able to make some pitches,” Trevino said. “That’s what he does. He’s an ace for a reason. He comes out and makes pitches when he needs to and he did that tonight.”

Before the two outings, Cole lasted a career-low 1 2/3 innings April 19 in Detroit and saw his ERA rise to 6.35 before it plummeted during the win streak.

Cole is 5-3 with a 4.14 ERA in 11 career starts against the Rangers and none of those starts were with Marcus Semien and Corey Seager in the Texas lineup. Seager is 3-for-10 against Cole, while Semien has three home runs, but just a .172 average against the right-hander in 29 at-bats.

In Wednesday’s streak-busting defeat against the Blue Jays, the Yankees’ Joey Gallo — formerly of the Rangers — hit a home run after missing three games because of a tight left groin. The Yankees loaded the bases in the ninth but couldn’t pull out the victory.

Texas lost nine of its first 11 games but heads to New York on a four-game winning streak. After winning the final two games of its three-game series against the visiting Atlanta Braves, Texas swept a two-game series with the host the Philadelphia Phillies this week. Brad Miller hit a two-run single in the 10th inning to give Texas a 2-1 victory Wednesday.

Texas pitchers own a 2.42 ERA in the past 12 games, and in the past 14 games the relievers own a 1.95 ERA after pitching three scoreless innings Wednesday.

“I just think internally that the guys have kind of come together and really embrace the challenge,” Texas manager Chris Woodward said. “Everybody in that room has belief. Guys are starting to find their roles and you can see the bullpen really starting to throw the ball well. Guys are starting to get comfortable out there and embracing the expectations.”

Former Yankees prospect Glenn Otto (1-0, 2.89) will look to keep the run of effective pitching extended for the Rangers when he makes his ninth career start.

Otto is 1-3 with a 7.44 ERA for the Rangers over the past two seasons since being acquired in last summer’s trade for Gallo. He last pitched April 27 against the Houston Astros when he allowed two runs on four hits in 4 1/3 innings.