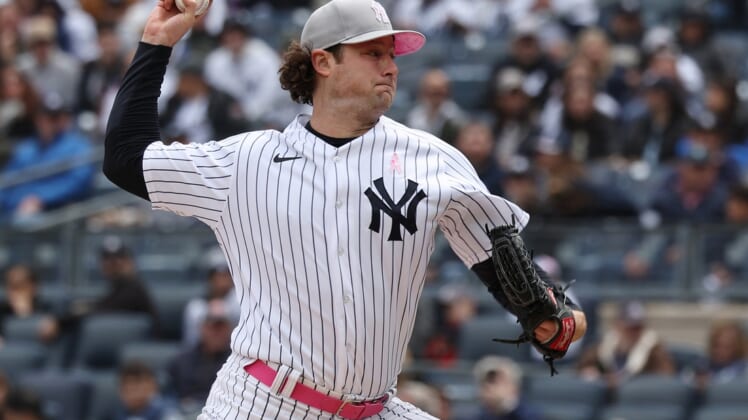 Gleyber Torres homered to lead off the ninth inning, lifting the New York Yankees to a 2-1 victory over the Texas Rangers in the opener of a doubleheader Sunday afternoon at Yankee Stadium.

Torres won it when he hit a 3-1 sinker from John King (1-1) into the right-field seats. The home run gave the Yankees their 12th win in 13 games.

New York ace Gerrit Cole allowed a run and five hits in 6 1/3 innings. He struck out 10, walked one and threw a season-high 114 pitches.

Cole allowed three hits in the first two innings, when he threw 47 pitches. After allowing his only walk, Cole retired 14 of 15 hitters before Kole Calhoun homered in the seventh.

Texas’ Dane Dunning took a no-hitter into the sixth and wound up allowing one run and two hits in six innings. He struck out five, walked three and did not throw any of his 100 pitches over 90.8 mph.

Calhoun ended Cole’s bid for a third straight scoreless start when he lined a full-count 97.6 mph fastball to the short porch and just inside the foul line with one out in the seventh. It was the only fastball Cole threw in the inning.

Jonathan Loáisiga followed Cole with 1 2/3 scoreless innings for the Yankees, and Clay Holmes (3-0) stranded Mitch Garver in the ninth before Torres came through.

Dunning lost his no-bid in the sixth, on his 86th pitch, when Aaron Judge hit an infield single to third baseman Brad Miller and easily beat the throw. Anthony Rizzo’s single moved Judge to third, and Giancarlo Stanton’s fly ball to left gave the Yankees a 1-0 lead.

Before getting the first hit, the Yankees couldn’t capitalize on two errors in the fifth.

Joey Gallo reached when first baseman Andy Ibáñez committed a throwing error on the toss to Dunning. Three batters later, Kyle Higashioka reached when Miller bobbled his grounder on a ball that slightly hopped up on him, but Dunning struck out Aaron Hicks to end the inning.