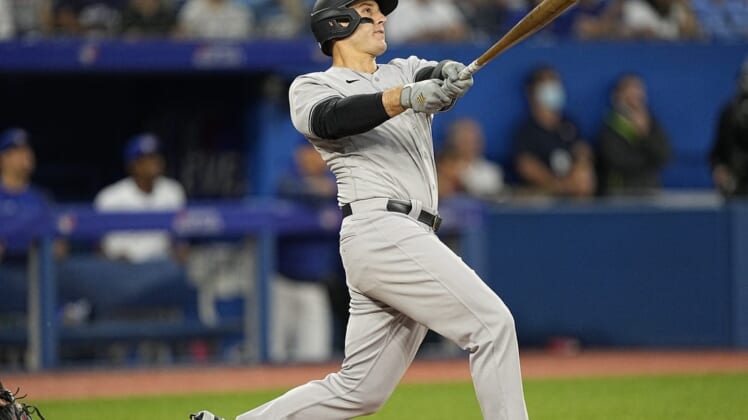 Giancarlo Stanton and Joey Gallo each hit two-run home runs and DJ Lemahieu added a solo shot for New York in the opener of a three-game series. Gallo had three RBIs for the Yankees, who have won eight in a row.

Kirk was hit by a pitch to lead off the bottom of the second. Teoscar Hernandez walked. Kirk took third on Matt Chapman’s fly out and scored on Moreno’s single up the middle.

LeMahieu led off the fourth with a single and scored on Gleyber Torres’s double to left. Gallo walked. Torres took third on a flyout and scored on Kyle Higashioka’s soft bouncer to Stripling.

Trent Thornton hit Rizzo with a pitch to open the fifth. Stanton followed with his 14th homer of the season, LeMahieu hit his sixth homer and Torres and Gallo doubled. Trevor Richards replaced Thornton with none out and allowed Isiah Kiner-Falefa’s single and stolen base. Judge was intentionally walked with one out and Rizzo hit his 17th homer of the season with two out. It was his first grand slam as a Yankee.

Manny Banuelos allowed a run in the seventh when Chapman doubled and scored when Moreno was given credit for an infield single.

Casey Lawrence, who entered in the sixth inning, hit Torres with a pitch to start the ninth and then allowed Gallo’s ninth homer of the season.